What better way to pay tribute to Lee Rigby than to badly stick ”RIP Lee Rigby” on the back of a top with a Union Flag on it and pose like you’re on Page 3. 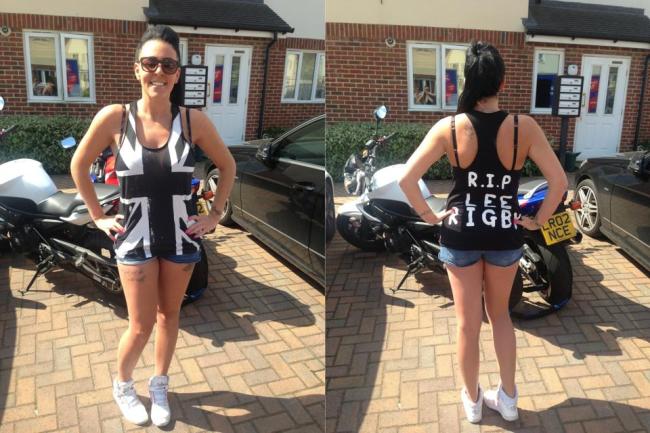 Oh, and you wear it on an EDL march to show respect to Rigby  while making a vigorously stupid point on your Facebook page, and I quote:

Try and arrest me today for wearing a Union Jack!!

Why do we know this?

Well, it’s because all of these stories have been shown to be either utter made up bollocks, or blowing up the truth to make a bigoted point in order to play on people’s prejudices (the Winterval story for example) or take a nugget of truth and turn it into a tale of hoe TEH MOOSLEMS are burning flags, etc and etc.

See, I’m betting Rigby’s family don’t see his name being slapped above the arse of some girl as being something entirely respectful of someone who was pointlessly murdered. Buy some flowers. Give some money to the Legion. Do something that isn’t focused round you, the EDL or mindless pointless fuckwittery. That’s paying respect to someone, not flashing your arse to the Redtops with Lee Rigby’s name badly stenciled just above it.

Now if this seems harsh, or I’m just picking on a clear daft wee girl, you’d be entirely right, but it’s deserved because this sort of stupidity shouldn’t be tolerated because it’s the little acts of careless, selfish stupidity that builds up to make people to think Christmas is being cancelled, or that marching with a bunch of drunken thugs is respect for a murder victim.

Then just as you think things can get more stupid, something else comes along to show that irony is indeed dead…..