At a festival you’re busy doing things and trying to plan your day as you go on. If the weather’s awful, you struggle against the conditions to wring everything you can out of it, but you know you can’t put anything off til tomorrow because there’s no tomorrow. It’s over and to rub in the fact it’s over you can refer back to your programme and see all the stuff you missed or were putting off til the next day but now you can’t because it’s coming to an end.

Two weeks ago I was in a field in Somerset having a ball. Those fields were rammed. This is them now… 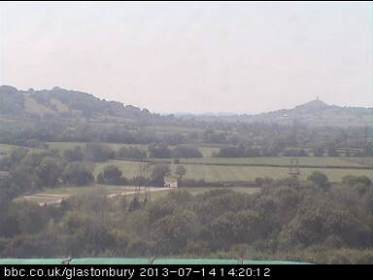 There’s a few signs that over 200,000 people were there two weeks ago. The skin is still up on the Pyramid Stage, and there’s the roads and paths, but otherwise it just looks like a field in summertime. It’s passed and gone.

I used to get the same feeling on the last day of a comic convention I was working. It’s a different feeling when you know your last day is going to be often the day when you make your money. You can get a feeling of that in this clip from Comic-Con Episode IV: A Fan’s Hope featuring Chuck Rozanski of Mile High Comics. I’m going to go into more detail about this sort of thing at conventions another time though…

There’s a feeling of loss and you suddenly realise you’re not living in the moment not to mention the reality of packing up and going home kicks in and I hate that as you can see here….

Still, you treasure the fun you had but milking the last day of all drops of joy is what I’ve tried to do but it still doesn’t stop the feeling that’s you’ve missed so much, and then as I’ve said, looking at your programme and realising you have.

So even though I feel T in the Park has become a horrible corporate thing (it always was really), I feel a little bit for those people walking around today who suddenly have the dread melancholy hit them around about now as they realise it’s all going to end and all that stuff they were going to do at the festival tomorrow isn’t going to happen. It’s coming to an end and you can’t stop it, no matter how much you try.