It’s October, the month of Halloween and what would be more clichéd than doing a rundown of one’s top horror films, so fully admitting to being a walking cliché, I will be doing a series of blogs running down the films in my own personal top 20. I will be tight in what I’m putting in so I’ll be talking about horror, not monster movies like King Kong or Godzilla, or the thriller/horror crossover film like Psycho or Silence of the Lambs. I’ve been tight as well and excluded glorious things like Theatre of Blood or Night of the Comet as although they are horror films I wanted to stick very firmly to what I suppose are pure horror films, and also, I’m not restricting myself to cinema but television series/films as well.

Essentially these are the films I watch to be scared, repulsed, shocked & horrified. My rules so there! Obviously spoilers will be included so be warned if you don’t know any of these films and want to see them fresh.

First up is Audition. 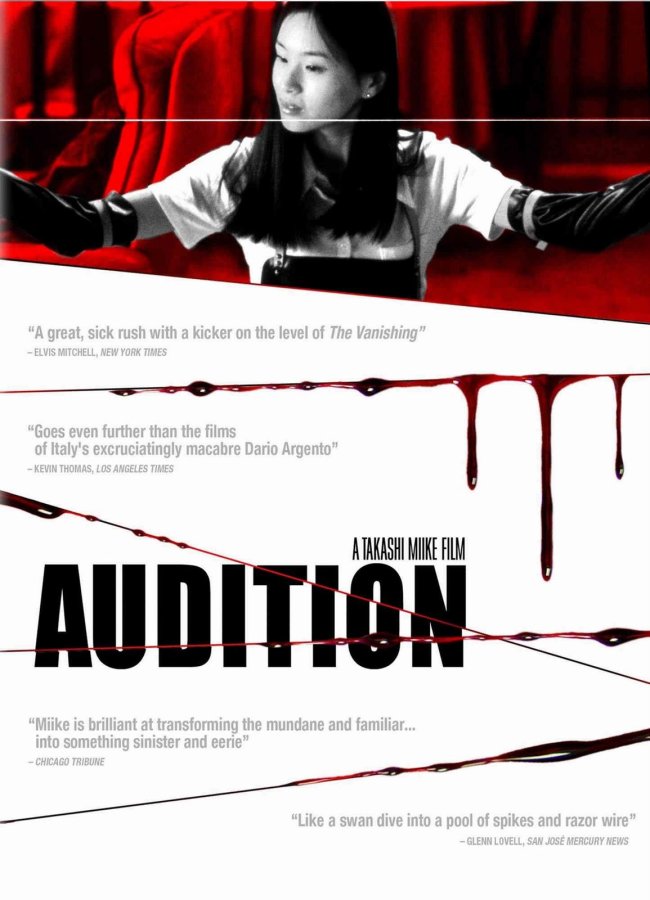 Audition was my first encounter with the Japanese director Takashi Miike. To say I was utterly unprepared for what I saw is an understatement to end all understatements. I was expecting something shocking, but when I first saw it I was frankly utterly bored rigid by the first 40 minutes or so of the film as it’s a sort or bizarre romantic drama as a widower organises fake auditions in order to find a woman to go out with. The concept is a bit stalkery but this opening 40 minutes lures you in with the empty life the main character Shigeharu Aoyama (played by Ryo Ishibashi) leads with his son.

We’re led through the auditions until Aoyama comes across Asami Yamazaki (played by Eihi Shiina) who he instantly falls for. This leads the film for a while into a romantic drama which is part sweet, cold, and boring all at the same time. There is however a point to all this as Miike is building up to something, or in this case a series of somethings as we’re told that Asami isn’t all she seems. The rest of the film builds up to some of the most horrifyingly painful scenes you’ll ever see in a film. These scenes are agonisingly horrible but you can’t look away from the beautifully shot horror that’s in front of our eyes.

Coming into this blind as I did was an amazing experience. I left the cinema shaking. Few films have ever done that to me and Audition still haunts me. It’s also truly perverse in a way a lot of mainstream horror films made since the millennium can only hope to be as it’s truly transgressive even 14 years later.

See Audition for what it is which is a film which makes you empathise with the leading characters as much as you can before it literally tears one of them apart in front of you. It’s a hard film to enjoy, but it’s an unmissable film.

Next up is is a horror film referenced by Kate Bush in one of her songs…………….