It’s October, the month of Halloween and what would be more clichéd than doing a countdown of top horror films, so fully admitting to being a walking cliché, I will be doing a series of blogs running down the films in my own personal top 20. Here’s the previous blogs for numbers 20, Audition, 19, Night of the Demon, 18, Zombie Flesh Eaters, 17, Last House on the Left, 16, The Beyond, 15, An American Werewolf in London, 14, [REC], 13, Don’t Look Now, 12, Event Horizon , 11, Cannibal Holocaust, 10, The Wicker Man, 9, Halloween, 8, The Blair Witch Project,  7, Hellraiser, 6, The Evil Dead series,  5, The Exorcist, 4, Suspiria and 3, George Romero’s Night of the Living Dead/Dawn of the Dead/Day of the Dead.

I’m nearly at number one but before we get there lets go for a trip in Texas in Tobe Hooper’s amazing The Texas Chain Saw Massacre. 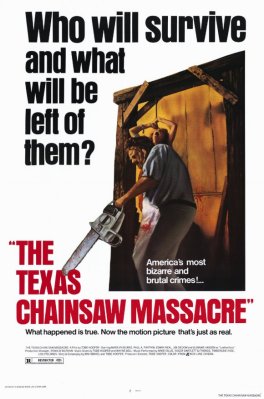 The plot is simple; a group of young people visiting a relatives grave after a series of grave robberies and worse, decide to visit one of their families old homes on the way back, but after picking up a bizarre hitchhiker the group are picked off one by one by a family of cannibals.

Sounds all fairly fun for an exploitation film but this isn’t a safe journey for the viewer, though the film does have a great streak of black humour that’s so dark that most people will miss it as they’re too busy being freaked out by what’s happening on the screen.This isn’t to say it’s splattered with gore; it’s not. In fact it’s pretty much lacking in gore, but it is violent. It’s the mood, feel and general atmosphere Hooper creates in the film that comes from a mix of some wonderfully bizarre performances, some inspired direction and a relentlessly disturbing soundtrack that all comes together with the truly twisted set design straight from a Graham Ingels story from an EC Comic, mixed with the story of Ed Gein.

Sadly the film suffered unbelievable censorship in the UK with the BBFC refusing it a certificate for decades, and when the Video Nasty fiasco happened and all uncertificated films endured the BBFC’s wrath with Texas Chain Saw Massacre suffering because of it. So for year the only way to see it in this country was by watching a grainy VHS copy, or smuggling a copy into the country on import on laserdisc.

Thankfully after the relaxation of censorship in this country post 1997 meant the film slowly seeped out to be appreciated for the remarkable work it is, not to mention it’s a massively influential one too as this was the film Ridley Scott watched to inspire him for Alien, and it shows.

Texas Chain Saw Massacre is an experience. It makes you doubt your own sanity at times as one disturbing image follows another so you can see why censors have a problem with the film as there’s nothing especially explicit to cut out. It’s the total package that grotesque and horrific so by the time you get to the image of an insane Leatherface dancing in the sun you’re so drained emotionally in a way I’ve rarely experienced.

Forget the sequels. Forget the remakes. Especially forget the remakes. This is all that matters. It’s an extraordinary film which is uncompromisingly brilliant. You’ll never want to hear a metal door slam shut again in your life after this..

And this means I’m about to reveal what my number one film is. Why have I not had any Hammer Films? Where’s the Cronenberg films? What about The Shining?