I’ve recently dived into doing ”best of’ list, so as I’ve explained, I’ve decided to do my top 20 SF films. This is my personal list, so feel free to disagree with it and of course, you’ll be horribly wrong. Previously at # 20, The Matrix. 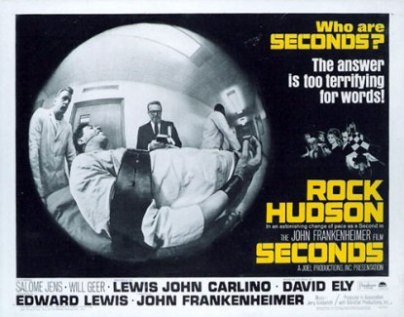 This is a film which seems to never be shown on TV, and in fact I only remember it being shown once on Channel 4 around 20 years ago, which is a pity as it’s a stunning film. First of all, a bit of plot…

Arthur Hamilton (played by John Randolph) is an aging banker unhappy with his life, but after being contacted by a friend who he thought was dead, is put in touch with a shadowy organisation called The Company, who can make him vanish and create a new life. While Hamilton is waiting to meet The Company and have an interview with them he’s drugged and after waking discovers that The Company have made a film showing him raping a girl when he was drugged which helps force to to accept The Company’s offer of a new life, but it’s made very clear he cannot return to his old life, or contact anyone he knew in his old life.

After a series of operations Hamilton awakes to fine he’s been transformed into Tony Wilson (played by Rock Hudson), a much younger man, and that he’s got a new life, new friends, a new home and most of all, a history which suggests Tony Wilson has always existed. As for Hamilton it’s made to look like he died in a fire so his old life is over and a new one as Tony Wilson awaits. For a while Wilson throws himself into his new life as a ‘Second” but he begins to have doubts which lead to a series of revelations that decide Wilson’s fate….

There’s more to the film than a genuinely well realised plot. The characters are well rounded, with people doing the sort of thing you’d expect in this extraordinary situation, however the film works not only because of Frankenheimer’s tight direction, but thanks to Hudson’s extraordinary performance of a man living a lie but enjoying every minute of his new life. In retrospect, it’s not hard to see why Hudson chose this role as here was a gay man trying hard to live a double life at a time when homosexuality was shunned in America, and in Hollywood in the 1950’s and 1960’s.

There’s also some amazingly bizarre images, plus the film as a strange tone that raises it way about being a Twilight Zone knock off. It’s almost like a very, very dark black comedy in places, but it’s a truly dark film, especially after Hudson’s character begins breaking the rules set up by The Company.

It’s worth more than a watch, it should be essential viewing for any SF, or film fan as it’s a wonderful work. Go watch a copy now!

Next time, the story of a dog named Blood…………