I’ve done my top 20 horror films in October, so as I’ve explained, I’ve decided to do my top 20 SF films. This is my personal list, so feel free to disagree with it and of course, you’ll be horribly wrong….

Diving right in at #20 is The Matrix. 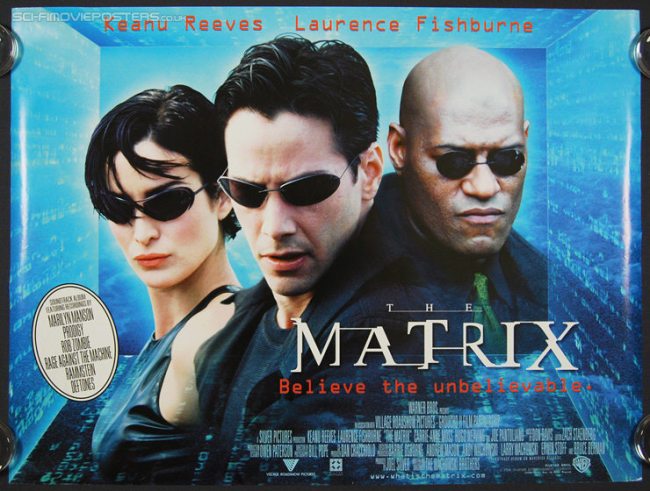 The Matrix came at a time when SF and films itself was being dominated by the first of the Star Wars prequels, so when it arrived it served as an alternative to what ended up being a horrible, horrible series of films.

What was great about The Matrix was that for those people unfamiliar with it’s sources (anime, Grant Morrison’s The Invisibles, Hong Kong action films, Philip K Dick) it all seemed new and fresh, while for those of us who noticed the influences still thought it fresh and exciting because it tried to give the viewer something different. OK, Keanu Reeves is wooden, some of the Aussie supporting cast are dreadful, and the posing in leather coats gets a bit tiresome at times, but it’s a solid, exciting SF action film that does everything it sets out to be. Unlike a lot of the films which followed it, this at least tries to say something about the state of humanity before diving feet first into the kicking arse and shooting people.

The first time I saw the film I was blown away by it as partly because I had such low expectations, but because it was this film that tried to do more than just be an action film. I’ve seen this film so many times but that’s because I can enjoy it each time, even if some of it does now start to look amazingly dated for a film only 14 years old. That’s progress for you!

Sadly, there were two sequels. Let’s not talk about them…

Next time, want to start a new life?