50 years ago today Doctor Who was born into the world. I was yet to be born myself and was barely a crusty stain on my parents bedding, but four years later I rolled into the world and one of my very, very early memories is watching Jon Pertwee dashing around during his time on the programme.

I think the first one I remember was one of the stories with the Master, but my first clear memory is of Claws of Axos, a story which still hangs together quite well. I especially likes the funkadellic aliens.

By the time Pertwee fought The Sea Devils I was utterly hooked. I still remember the scene on the deserted oil rig and the scenes on the beach with the monsters coming out of the sea.

I loved Pertwee’s Doctor, he was heroic, serious, dashing and ran around in hovercraft, cars or motorbikes. I didn’t realise til older that something like Claws of Axos owed much to Quatermass, but when I saw The Three Doctors my mind was blown as I knew Pertwee wasn’t the first Doctor but I’d never seen the others, so to see three in one story was wonderful, and I also instantly adored Patrick Troughton’s Doctor, but was distant to William Hartnell’s Doctor. It wasn’t til much later in life that I finally appreciated Hartnell’s portrayal, but seeing Troughton in The Three Doctors was a breath of fresh air.

The other thing the programme gave me was a love of electronic music. The title music was this weird, bizarre thing that sounded like nothing else on TV in the early 70’s, or even today. One of the problems I have with the new series is the fact the music is frankly, so boring and predictable compared to the music of the BBC Radiophonic Workshop and Delia Derbyshire.

For the next few years I lapped up Doctor Who, so when it was announced that Pertwee was leaving to be replaced by some grinning weirdo called Tom Baker…. 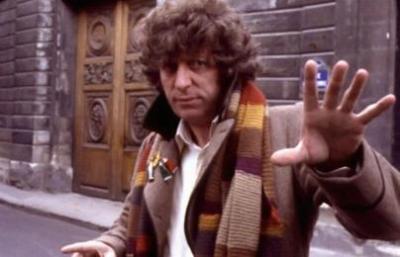 When Baker became the Doctor, I was angry. How dare the BBC let this man replace my Doctor! All that frustration though vanished when I saw Baker in action. The man was the Doctor, he was simply astonishing as he defined the part for his own just as the three previous actors had done. Stories like Genesis of the Daleks and Pyramids of Mars, defined Baker as the essential Doctor for a generation, and even die-hard Pertwee fans like me adored Baker.

I’ve met Baker twice. Once was at a book signing at John Menzies in Glasgow  where he signed my copy of Doctor Who and the Cave Monsters. He didn’t seem to mind he was signing his name on a book featuring my beloved Pertwee and not him. 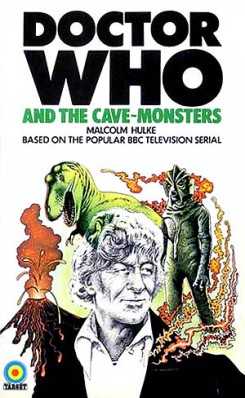 Second time was in a pub just off Regents Street in London. I didn’t recognise him but as soon as I heard the voice it was unmistakable. It took me two pints to pluck up the courage to say hello, and when I did he was utterly charming as I told him the story of how he signed my book as a kid some years earlier. This prompted a jolly pisstake of Pertwee and a sly wink as he went back to drinking heavily and holding court to the pub’s customers and staff.

As I was growing up I became more versed in other science fiction, plus I discovered there was more to SF than Who, but I still loved the programme thanks to Baker mainly but the scripts were getting weak, and Baker was looking tired, so when he left to a huge cry of pain from fans to be replaced by Peter Davison I wasn’t actually upset as there was time for change.

Davison was never my favourite Doctor. That’s always going to be Pertwee/Tom Baker, but Davison was fresh, young and did things in the role none of the other actors had done. Sadly he was lumbered with some dreadful stories, but as he went out on a high with Caves of Androzani, I was becoming increasingly bored with Who. Colin Baker’s arrival saw me drift away from the programme which also coincided with discovering drinking, pubs, gigs and girls.

I watched maybe a few episodes of Sylvester McCoy’s run. I’d loved McCoy from his appearances on Tiswas and Vision On as a kid, but he struck me as being horribly miscast, and I couldn’t be bothered anymore. I’d moved on and frankly, Doctor Who had crawled up it’s own backside in terms of annoying fan service, continuity and a seemingly never ending run of awful stories. When the programme died I didn’t shed any tears over it as it needed a revamp, or a rest.

This brings me to Paul McGann’s 1996 film. On the whole it’s a poor film with some great moments, but McGann brings exactly the sort of kick up the arse the programme needed.Shame it was only (until recently) only the one appearance from McGann. Thing is it seemed the programme was really, really dead and would remain something a number of us would just look back at fondly.

Then amazingly it was announced in 2004 the programme was returning not only with a huge budget, but with Russell T Davies writing it, and Christopher Eccleston as the Doctor. That first series had some great moments and Eccleston’s Doctor was superb but it didn’t feel like the same programme. Things were a bit too glossy for it’s own good, plus as I’ve said, the music bloody annoyed me, but what Davies had done was to give the programme the huge kick up the arse it needed.

It was also a huge success not just here in the UK, but worldwide as it became the sort of geek hit that happens all the time in the 21st century however it wasn’t til Eccleston was replaced by David Tennant that the programme went insane in it’s popularity. I don’t think I’ve ever known the programme to be so successful, though the question of it being better is open to debate by fans on online forums til the world ends.

Tonight is the 50th anniversary with Matt Smith as the latest Doctor who like many of his predecessors suffers from being a great Doctor with some awful scripts. He’s joined by (at least) a returning David Tennant and John Hurt as the ‘War Doctor’ in a special that tops off a week of celebrations for the 50th anniversary of a programme most of thought had died never to return.

So happy birthday Doctor Who. I hope tonight is fun and I hope it’s been a good anniversary for us all as we’ve also got a new Doctor in the shape of Peter Capaldi to look forward to later this year, It’s been 50 years of ups and downs but right now enjoy this as it’s probably never going to get bigger than this for the programme or it’s fans, unless of course it hits 100 years and of course by then we’ll all be heads floating in jars….