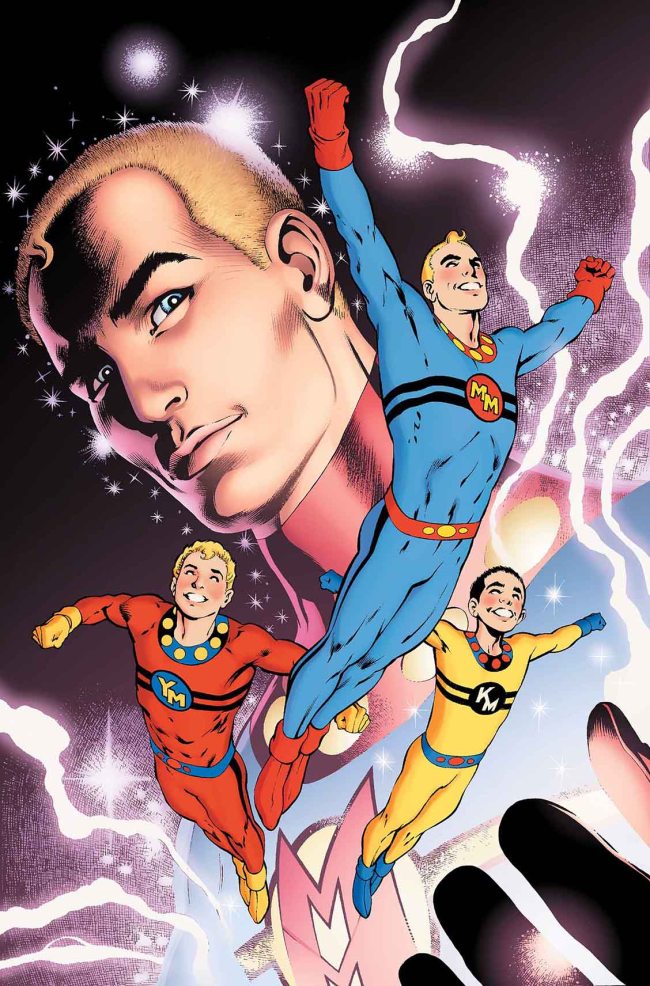 I was pleasantly surprised with Marvel’s treatment of the Marvelman material from Warrior in the first issue of these reprints, but found the firs tissue just a wee bit too padded out. I’m glad to say the second issue shows signs that Marvel aren’t going to just pad out every issue with half an issue’s worth of Mick Anglo reprints. This isn’t to say that the Anglo material isn’t nice, but at $4.99 (around £3.50) a pop this isn’t material frankly worth that amount each issue. It’s the Alan Moore and Garry Leach material we want and we start to get Marvelman hitting it’s stride with these episodes, plus there’s the never before reprinted episode, The Yesterday Gambit, which is a fascinating read, especially if like me you’ve not read it in probably 20 years at least.

The issue picks up with the morning after the night before, with Liz Moran coming to terms with the fact her husband Mike, is Marvel/Miracleman and is a superhero. 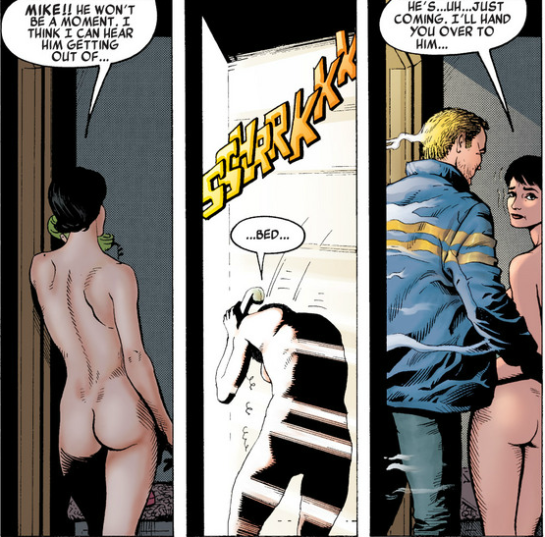 The colouring here is splendid and the middle panel here is an example of the craft that’s went into making these strips work not only in colour, but for a 21st century audience who may never have seen these comics before. The little specks of flesh tone in the second panel are a subtle touch which a lesser colourist than Steve Oliff would have missed.

This though is the episode which reveals that Kid Marvelman, Johnny Bates, survived the incident which killed Young Marvelman and left Mike Moran suffering from amnesia. As Bates and the Moran’s discuss what’s happened we get hints that something bad is building up.

Most of this episode is Bates and Moran talking, but it’s in Garry Leach’s sublime art we get the hints something bad is coming, so when Mike finally confronts Bates about him still being Kid Miracleman we’re prepared. 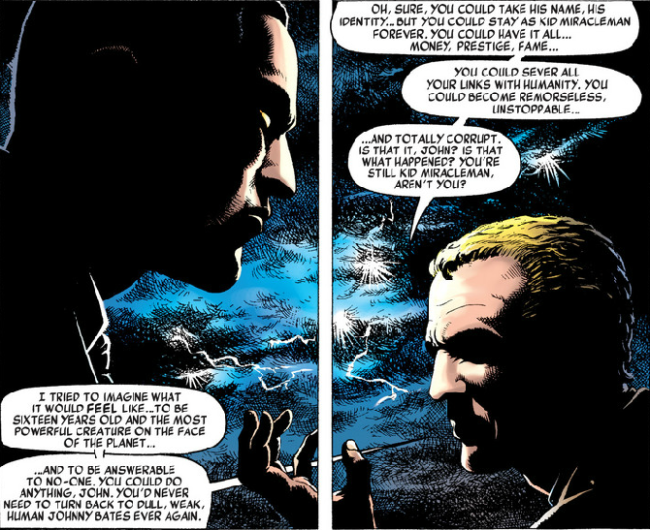 Or at least, we think we’re prepared. Cast your mind back to 1982 and seeing this for the first time, or indeed try to put yourself in the head of someone in 1982 seeing this, so you’re expecting a normal superhero fight scene but as soon as Bates reveals himself Moore turns things round. 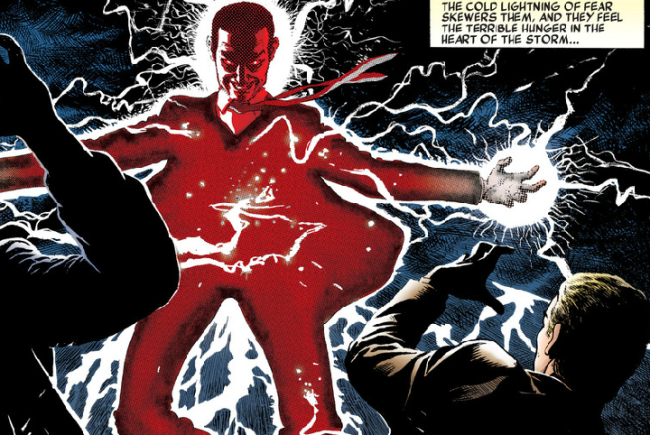 The fight scene that follows is one that pretty much changed how the superhero fight scene would be realised, and to this day there’s still people desperately pulling whatever bits of flesh left on this carcass off but at the same time, most miss the power of Moore’s writing, and of course, there’s only one Gary Leach. 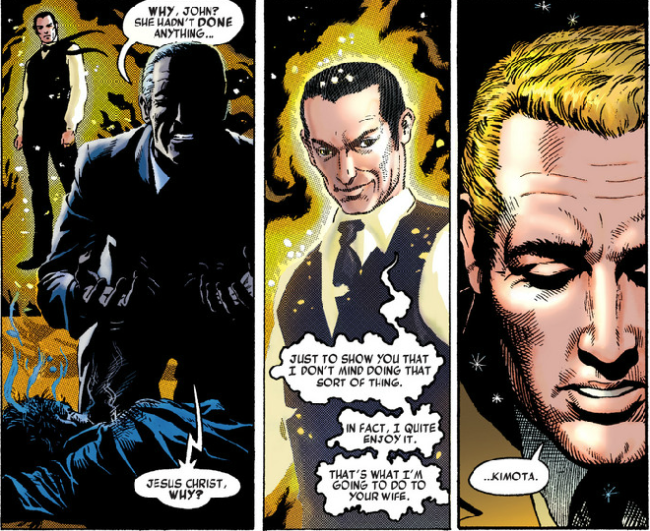 No posturing. No big dramatic speech. No dramatics. Just a quiet ‘kimota’ and then the fight begins in earnest only for the reader to see Marvelman get his arse kicked and a small child be threatened by Bates which was, and still is, amazingly shocking as it makes it clear this is not your usual superhero comic you’re reading. 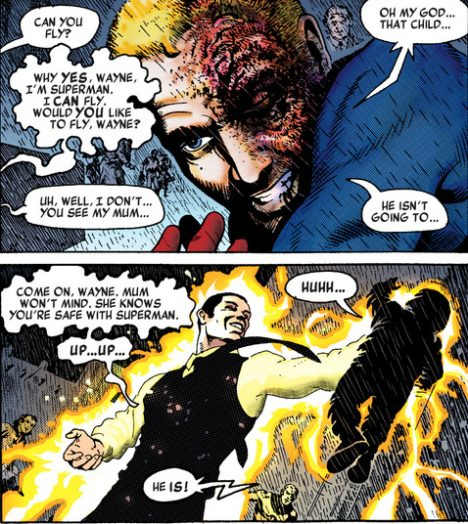 As for what happens to the child and Marvelman, buy the comic or wait til I talk about #3.As for the rest of this second issue, the biggest thing for me is the reprint of The Yesterday Gambit. 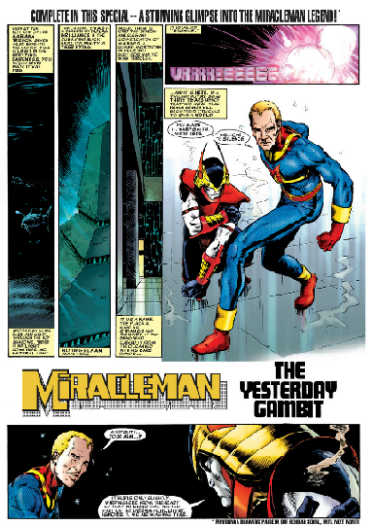 This was originally printed in Warrior#4, or the Warrior Summer Special to give it it’s better known title. It’s a look far into the future of the Miracleman story, and shows just how far thought out Moore had the story, but for new readers it’s worth pointing out that when you do get to that part of Moore’s story, he’s moved on. This is the Moore before Watchmen, Halo Jones and even V for Vendetta when it hits it’s stride, so this is an interesting oddity which reveals what might have happened to Moore had he remained a very good comic writer, as opposed to an excellent writer. It’s also a chance to see some good Paul Neary art. 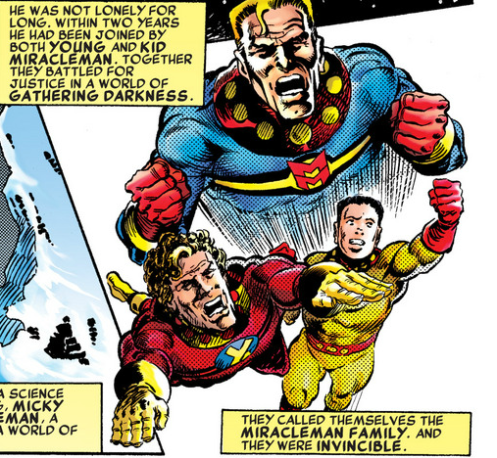 And the first work on Marvelman by Alan Davis, and in colour it’s simply stunning.

As for the rest of the issue there’s more original art from Gary Leach, which is nice. A short history of British comics by Mike Conroy which really is a short history and a couple of Mick Anglo Marvelman strips from the 1950’s. It’s a much more satisfying package than issue one, though it does seem Marvel are trying to follow the Eclipse reprint schedule which is a pity, but seeing as next issue promises more never before reprinted material that seems fine for the moment.

There’s also a fuss regarding Comixology’s censored versions (you can buy a 17+ version which is the version I’ve taken these scans from) which is mainly due to what we know is coming, especially the post-Warrior material. We’ll see soon enough but I can see how the birth issue or the final Marvelman/Bates battle can be printed censored without ripping the heart out of these episodes.

That’s for later on in 2014. Next issue is the completion of Marvelman’s fight with Bates and the reprint of some Warpsmith strips which have never been reprinted before.

15 thoughts on “What I thought of Miracleman #2”