I spoke a few weeks back about Janelle Asselin’s critique of a Teen Titans cover for the website Comic Book Resources. Since then things have taken a pretty dramatic turn for the worst, if you can imagine of course that there’s worse than throwing around rape threats at a woman who dared call a bad cover bad. Since then it’s actually got worse which is something of an achievement.

It turns out that Asselin has been threatened across social media not only with rape, but her home address and bank account details have been hacked and printed online, including on the Comic Book Resources  forums which is why they were forced to reboot their entire forums. It’s also a story which has made the pages of The Guardian with an article where the comments again reflect the fact that there’s a bloody load of work to do to drag things into the 21st century.

Over and over again the same questions come up mainly from I assume, people who know nothing about comics, or indeed the sort of reductive knuckle-dragging scum who threatened women with rape because they said something about their creepy wank material. For the sake of argument, let’s throw up some of these questions and for the sake of argument, I am paraphrasing or at least, translating it into English for you to read.

”But Wonder Girl and other female superheroes have always been drawn like this? What’s the problem?”

Errr, no. This is Wonder Girl as drawn when she first appeared when she was still a younger version of Wonder Woman, and not a separate character.

This was pretty much how she was drawn until she went through a Swinging Sixties revamp which was the look she kept until the late 80’s. Here’s a great cover from the wonderful Nick Cardy.

After that, the character went through a series of revamps but the look was always along the same lines and away from what sparked this nonsense in the first place.

And just to remind everyone, this is what Wonder Girl looks like now.

Now other female superheroes have been drawn sexily which is where I have to bring up Phantom Lady which is always used by people defending sexism in superhero comics as a trump card. Except she isn’t. Here’s an early appearance. 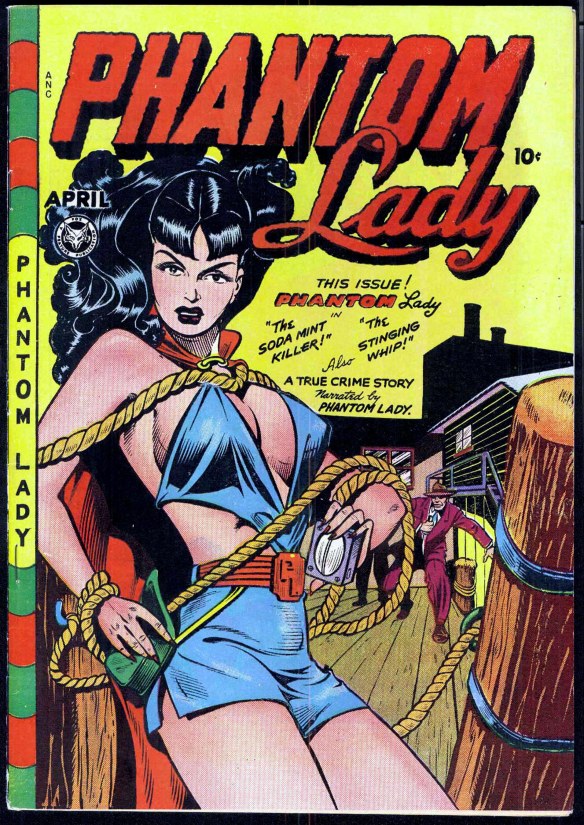 It’s close and it’s a wonderful example of 1940’s cheesecake but she was also drawn like this.

And when the character returned to comics in the 1970’s, she was drawn like this on the this JLA cover, again by the great Nick Cardy.

As we approach the 1990’s she was drawn like this.

Phantom Lady shows there’s been characters who’ve drawn in a sexy cheesecake fashion since they first appeared. She does not show that all female characters have been drawn this way.

Take as an example how the great Jack Kirby drew women. Here’s his Sue Storm from an early issue of Fantastic Four.

As Kirby’s style developed so did how he drew women and people generally but Kirby could still draw sexy women, though they still had that power that Kirby’s work in the 60’s and 70’s had.

Then there’s Big Barda, probably the ultimate Kirby vision of female power who stood on her own terms and her own ground. She wasn’t an offshoot of an existing character (apart from being married to Mr. Miracle, though it’s made clear it’s a marriage of equals)  or attached limply to a male character as say, Sue Storm was.

Let’s also bring up John Buscema’s women who were also strong, but normal (as normal as you get in superhero/fantasy comics) women, but it’s worth noting his men weren’t musclebound bodybuilders but strong defined men like his women. 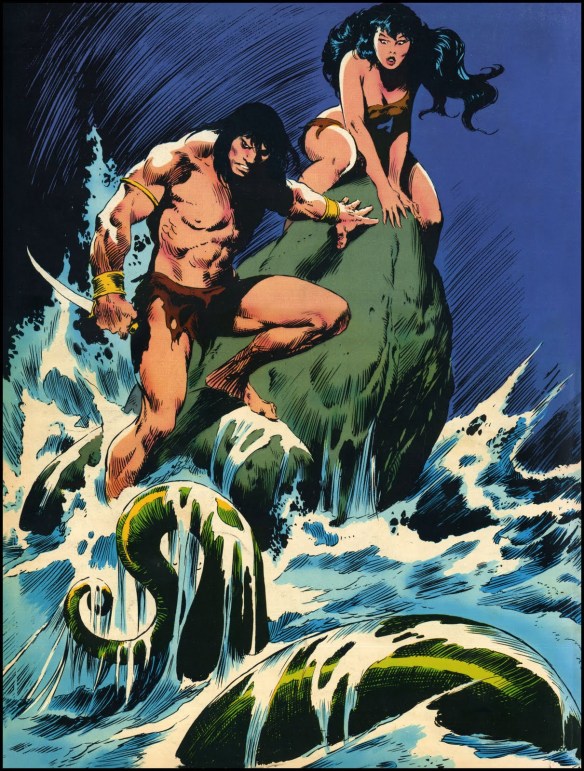 The next question thrown around is something like this:

”But if girls, women and kids want to read superhero comics then why don’t you create some of your own and then see who buys it?

This really is about throwing people off the scent. There are indeed good comics out there in both print and digital format that kids and girls can enjoy. The thing is people asking this are excluding women and especially children from the superheroes they see around them and they want to enjoy.

The Teen Titans for example are still actively marketed to young children, including girls. To a child, the Wonder Girl they see on the Titans cartoon is the same Wonder Girl in the comics so they see an image of something which doesn’t look like them and are instantly alienated. See, children are attracted to superhero comics because they like the power fantasies, even the girls like the fantasies plus it’s a chance to see women doing the same as men in an action setting. Not all girls like ponies and pink you see. Some want the action and adventure as much as the boys in their class.By saying ‘go do your own stuff, this is for boys‘, you are in fact, telling young girls and women to fuck off. It’s frankly repugnant that people are so intent to maintain the boy’s club of superhero comics that they’ll pull any auld shite out their arse to justify their misogyny.

This brings me to the next question:

”But how can outsiders to the comics community know they’re right”.

This is paraphrasing but essentially the term ‘outsider‘ or ‘true fan‘ is thrown around to try to Other people, especially women. It’s designed to put someone like Asselin was, on the outside of the ‘accepted community’ so like a disease they must be cast out to protect the rest of the body. It is, frankly, sociopathic and little bit psychotic.

Truth is the comics community should welcome anyone. Comics have been the artform of the outsider for the two centuries they’ve existed as we know them today so welcoming in like-minded people should open us all up to new ideas and new ideas are glorious, fantastic things. Closing the doors and sealing off new ideas is against everything the community, and society generally stands for. Without new ideas and new input, the community shrivels and dies. To give an example, back in the 80’s the NME had what’s called the ‘hip-hop wars’ as older writers wanted to stick to discussing guitar based music, while newer writers thought that not opening up the paper to new idea and new music was against the ethos of the paper. Thankfully the latter party won the day and a vast amount of people across the UK were exposed to new music and ideas that helped form new ideas.

To quote the writer Brian Bendis from this interview:

I know I sound like I’m a hundred years old when I say this, but with the growth of the online comics community came more awareness of the world and who’s really reading these books. And y’know what? Sure, there are people who look like Captain America who read comics, but there are very few people in the world who look like Captain America. I go to conventions, and you meet hundreds of people over the course of the day, and no two of them look alike. You see women and people of color who love comics, and there’s nothing representing them in a way that isn’t sexualized or something.

Bendis is right. The internet has completely changed things so that maybe in the past you could seal yourself off, but with open access to web communities everywhere, the scale of the readership and potential audience for not just superhero comics, but comics as a medium has become clear. It is bloody massive.

Now I could string off a number of questions being used to deflect from the issue but I’ve tackled what I see to be the main ones. There’s is in fact nothing to excuse girls being excluded, or black people being excluded, or Asians, or anyone from the wider comic community because they look at a comic and can’t see where it represents them as people. As a white bloke I see representations of me and can tap back into the identification with power fantasies I had when I first started reading Marvel UK’s reprinted material back in the early 1970’s. As an outsider I enjoyed these tales of extraordinary people doing extraordinary things and as I got older I was amazed to find other people who had similar experiences, and that included people who told me that if you don’t get people of all types into reading comics, then the industry will wither and die.

Well, comics as a medium are stronger than they’ve ever, ever been. The superhero industry is stuck in a rut with declining sales and it doesn’t take a genius to work out the lack of new ideas, which in turn would bring in new readers and develop the genre would help, but no. It’s all about pandering to a few thousand rather than the millions of potential readers. That’s the problem along with those throwing out rape threats because they themselves somehow feel threatened by a woman criticising a cover. Think about how insane this actually is and how all these questions I’ve paraphrased are used to defend attacks verbally upon anyone actually defending Asselin’s critique, or indeed questioning how sexist a part of the comics community actually is.

In short it’s a great time for everyone. We’re moving on and if you don’t like it, then perhaps this community isn’t for you. If you secretly support those taking a pop at the likes of Asselin then it’s you who’s the problem and really, the rest of of don’t want you around. If you can’t open your mind to new ideas, if you can’t listen then there is no fucking point having an informed dialogue with you. Those who may be open to new ideas should read up on the subject and educate yourself because this is the age of instant information. Use it. There’s no excuse for ignorance anymore, nor should it be tolerated one bit.