With the European Elections just over a week away, the campaigning is getting more and more frantic, but the news is dominated not by discussion of policies but of censorship, and even worse, totalitarian style police intimidation of political campaigners.

For the unaware things kicked off last week with UKIP complaining about former KLF co-founder Bill Drummond painting a UKIP billboard in Birmingham grey in a political stunt which is very typically Drummond. This caused UKIP supporters to froth merrily that Drummond was indulging in ‘censorship’ though it’s worth noting Drummond’s final couple of paragraphs from the article where he discusses what he’s done.

That was only a couple of hours ago, but already the doubts are rushing in. Photos of my handiwork are out there in Facebook and Twitter-land, being shared, retweeted, liked and favoured. Is all I’ve done pull the pose of the rebel? A mere publicity stunt? Was it done just to appeal to those that would already agree with the sentiments? By doing this have I added to the political discourse in the country in any sort of positive way? Or does it just entrench opinions? So much of what I perceive to be political art only entrenches opinions. Or should I be doing the same to every billboard expressing the same sentiments across the West Midlands?

If you have any thoughts on the above maybe you should join me for the knit and natter session between 2pm and 4pm on Saturday at Eastside Projects. I could show you the billboard while we are at it

Drummond makes clear he’s engaging a debate here. It’s vandalism but it’s also political activism as well as a very typically Drummond-esque piece of performance art or piss taking. The arguments against Drummond are summed up well in this piece from a Libertarian blogger for the Telegraph by the name of Daniel Jackson who argues that:

Drummond is a jack of all trades. Artist, musician, writer, manager, theatre designer, carpenter, baker. I think that if I had tried as many things with so little success I might try my hand at self-immolation next.

Which is Jackson trying to belittle the fact Drummond changed the face of dance music, something few people can ever say they ever did, especially a Libertarian blogger by the name of Daniel Jackson. But he continues to plough this field….

Drummond is typical of a certain strand of the new Left. He thinks he has the moral authority to censor bookmakers and loan companies and political parties that he has no time for. He thinks he knows what is best for us.

Here’s the debate as framed by Jackson, UKIP and various other Libertarian and right wing mouthpieces. Drummond is ‘censoring’ UKIP, even though they ignore the fact Drummond wants a debate, and he wants to discuss with people why he finds UKIP vile. It is however not censorship. As said, vandalism yes, but it’s not intimidating people into not voting or discussing UKIP as it’s a stunt to get people to discuss what UKIP are.

Sadly Drummond hasn’t got UKIP supporters engaging with him rather they follow the same tired arguments that Drummond is a censor and he’s stifling debate.

Fast-forward a few days and this image titled ‘Ten reasons to vote for UKIP‘  becomes a meme shared probably tens of thousands of times on social media.

This image was adapted by one used by the Green Party supporter Michael Abberton which is fully referenced with the links showing where these claims come from. This is that version: 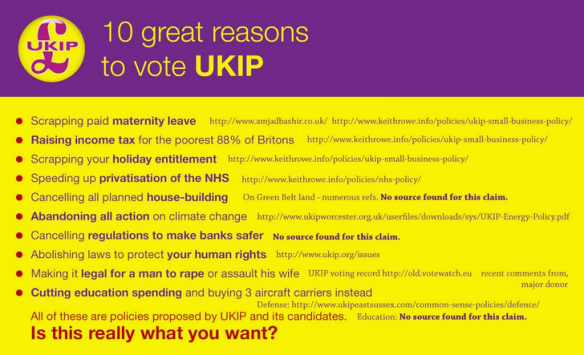 The fact so many of the initial claims could be referenced so easily should be the story and indeed, this is what we should all be talking about. Instead what happened was that Abberton was reported to Cambridgeshire police and two police officers had their time wasted visiting him to discuss this image. To quote Abberton:

“They asked me to ‘take it down’ but I said I couldn’t as it had already been retweeted and appropriated, copied, many times and I no longer had any control of it (I had to explain to one of the officers what Twitter was and how it worked). They said that they couldn’t force me to take it down anyway.”

The police said they made inquiries “as to whether any offences had been committed under the Representation of the People Act but none were revealed and no further action was taken.” The complaint from Ukip was that Abberton was impersonating and misrepresenting the party.

This made me angry as this was as bad as the infringements upon civil liberties overseen by Labour, and previously the Tories, while the coalition also happily indulge on what Labour left in place for them. Considering UKIP are saying ‘we’re not like the others’, it’d be somewhat shocking for anyone to see one of them trying to suppress legitimate political discussion, in this case of UKIP policies which Nigel Farage tries to avoid going into in any great detail.

Bright was then a Tory MP and a typically loyal one who would have vanished quietly into history had he not introduced the Private Members Bill which eventually became the 1984 Video Recordings Act, one of the most despicable bits of postwar state censorship ever to become law in the UK not to mention a law based upon lies, ignorance and government studies which were made up or completely distorted data in order to justify this state censorship. I’d recommend searching out Martin Barker’s excellent books on the subject, or see Jake West’s splendid documentary, Video Nasties: The Definitive Guide which is essential viewing for anyone interested in how moral scares lead to media manipulation and state censorship.

As for Bright, he thought dogs could be corrupted too!

So this is the Commissioner for the county where a worrying act of political intimidation has taken place. A man who thinks horror films would corrupt dogs. A man who is seemingly locked in an eternal loop of failing upwards. I don’t have any confidence that Bright will reveal how his police force got a private address of a blogger, or how he thought wasting two officers time who could well, be actually dealing with crime, is a worthy use of taxpayers money but I eagerly await a reason to rival horror films corrupting dogs.

In the days since Abberton’s wee chat with the police other bloggers have also reported complaints from UKIP supporters which have mentioned the police being involved, and in some cases there may have been direct contact with the police though this (as yet) isn’t confirmed as far as I know. Which brings me to the point. UKIP supporters are fond of saying ‘they believe in free speech’ which is great but a large number seem not to, especially when discussing their policies which is where UKIP are weak because the working class aren’t going to vote for a party which is going to drag them into the Stone Age.

It’s also worth pointing out that we have no firm free speech legislation like the American First Amendment in the UK as we have a number of laws here and there though we are protected under Article 10 of the Human Rights Act which protects freedom of expression. The salient points being:

The type of expression protected includes:

This means that Drummond is protected under law. As are UKIP. This is not a simple case of binary logic as UKIP seem to think, or are trying to make it to be. Freedom of expression is important be that an old raver painting a UKIP billboard grey or UKIP moaning like pissy babies about said billboard.

What isn’t playing the game are UKIP siccing the police onto bloggers. That’s verging upon, and is, censorship. It’s amazingly concerning, especially as UKIP make it clear they want to dump the Human Rights Act, which would also mean the laws which protect you or I expressing ourselves in a democracy would be infringed, and although there’s talk of a ‘British Bill of Rights’ there’s no detail, or indeed, no actual informed debate, something common with UKIP. There should be no intimidation from any party for anyone making any form of debate or protest which makes others question that party, or even just makes that party look silly. The minute debate attempts to be suppressed is the minute a party, in this case UKIP, needs to be looked at as to just why they don’t want their polices discussed in an open debate rather than forcing people to censor themselves even though they are protected under law.

It’s frankly, a fucking disgrace. The more people protest about this, then the harder it’ll become for UKIP’s highly active supporters to try to clamp down on legitimate protest and debate. So let’s now take the debate and slap it right at UKIP’s feet as after all, they wanted a debate so let’s give them one. The more people who see UKIP what they are really, the better.