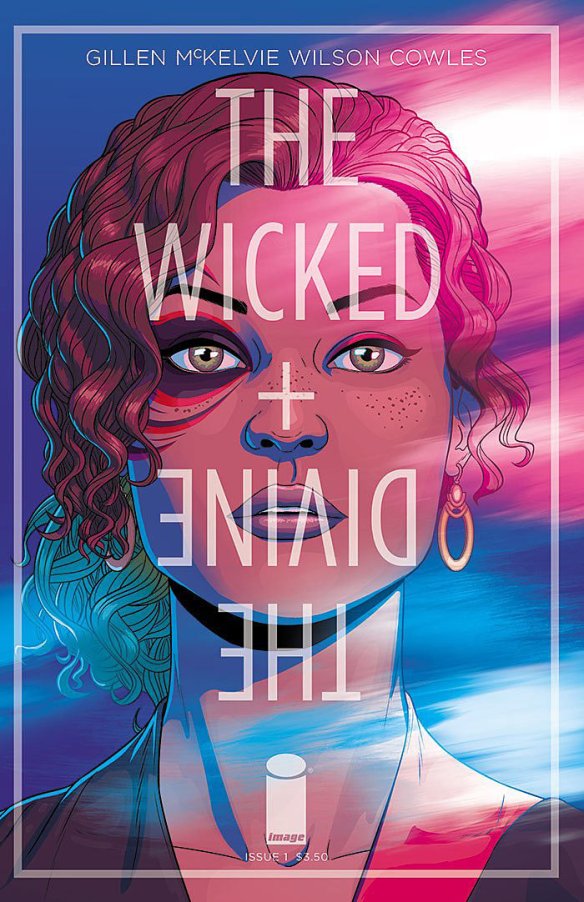 The Wicked and the Divine is the new comic from the Phonogram team of Keiron Gillen and Jamie McKelvie. It comes with an extraordinary amount of hype in not just the dark ghettos of the comic press but in actual proper media which for what is essentially a superhero comic is still quite remarkable even in 2014 when superheroes and comics are such a part of mainstream culture.

Every ninety years, twelve gods incarnate as teenagers. They are loved. They are hated. In two years, they are dead. The team behind critically thermonuclear floor-fillers Young Avengers and PHONOGRAMreunite to start a new ongoing superhero fantasy with a beautiful oversized issue. Welcome to THE WICKED + THE DIVINE, where gods are the ultimate pop-stars. But remember: just because you’re immortal, doesn’t mean you’re going to live forever.

I liked Phonogram but found it amazingly infuriating that it ended up being a fantasy comic as there’s great comics potential in using Britpop or rave culture of the 90’s (which is entirely different to UK rave culture of today, or what’s called ‘rave culture’ in the US) for telling stories though I understand the commercial reasons for doing so. My wish is that creators do what they want but I’m tired of everything have to revolve around the same sort of ‘dark fantasy’ setting.

So with that in mind I approached The Wicked and the Divine with some trepidation though it was tempered by the simply beautiful McKelvie cover not to mention his wonderful interior art. As for the story it’s hard to give an overall impression as obviously this is the first issue of an ongoing series but the feeling I have is that although the idea of gods who appear every 90 years to be loved and hated is a nice idea to critique modern transient pop culture, the trappings of superheroes often get in the way of Gillen’s commentary about pop culture and the ecstasies of watching someone who is your idol and your hero. 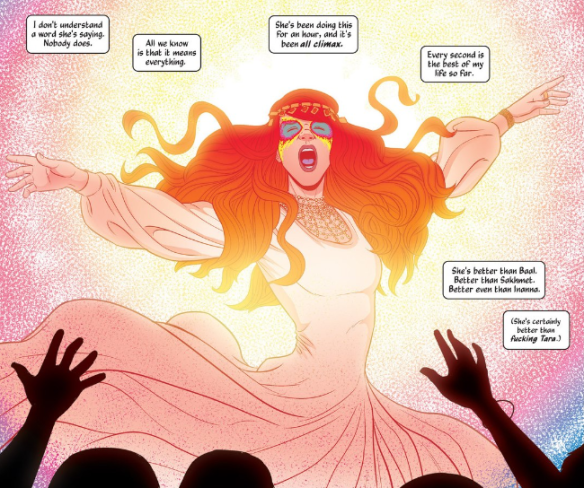 The main character is a girl called Laura who seems to live for this god/pop idol Amaterasu, and thanks to Luci (another of the gods who is actually Lucifer herself) she does just that as Amaterasu is being interviewed by someone who very much seems like she’s inspired by Laurie Penny. 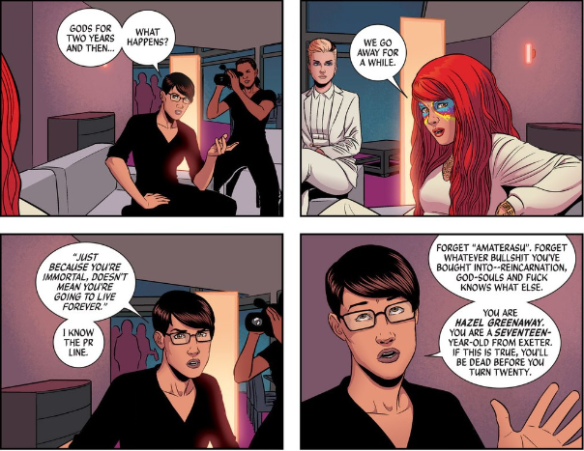 It’s these few pages that give a glimpse into the intellectual background of the comic, while showing McKelvie play with a 12 panel grid which makes for some excellent storytelling from writer and artist but because it’s a superhero comic this is stopped with a fight scene and then the issue ends in a court room, which is where unfortunately I ended up being taken out of the story.

The Wicked and the Divine is a good solid comic let down by trying to do too much to hook it’s audience not to mention that Gillen’s dialogue is written in that comic style we’ve seen from the likes of Warren Ellis which means people don’t actually talk like people, but comic characters. This isn’t to say I disliked the comic, I didn’t but I see a pair of creators with enormous potential holding back from doing something incredibly unique, but as this is a first issue and I’ll be picking up the next few at least I’m going to see where they take the reader and I’d recommend this to anyone who is at least wanting to see someone try something different with superheroes.