Issue two of Grant Morrison’s Annihilator tends to confirm my thoughts about the first issue that this would have been better published say, 20 years ago as this is more of Morrison going over old ground, however it’s not all bloated cover versions of his own work Morrison is doing here as he’s happily pilfering again from the likes of Michael Moorcock and Alan Moore.

This issue opens with screenwriter Ray Spass facing his creation Max Nomax as Spass is trying to kill himself. Again this is Morrison playing with the real and the fictional as both worlds collide, but it feels lumpy and leaden as Spass threatens to kill Nomax who he assumes is a hallucination brought on by his terminal condition. 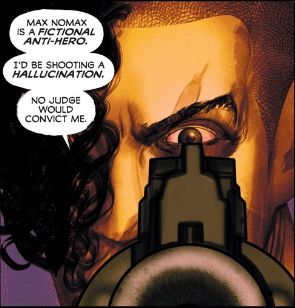 So we the reader aren’t sure whether Nomax is actually real, or as Spass thinks, a figment of his imagination brought on by his brain tumour, however Noamx prompts Spass to write and continue telling the story of Max Nomax which throws us back into a actually quite wonderfully overblown and pompous space opera.

For all the cliches and feelings that Morrison hasn’t only just been down this road before, Annihilator isn’t a bad comic at all. In fact, it’s bloody good but it feels like something from the 1990’s more in this issue than the previous. It doesn’t feel like it’s doing or saying anything new apart from telling a pretty good story well with some fantastic Fraser Irving art.

It just feels like lumpy soup that warms you up on a winter’s night but you forget about before you go to bed.

3 thoughts on “What I thought of Annihilator #2”