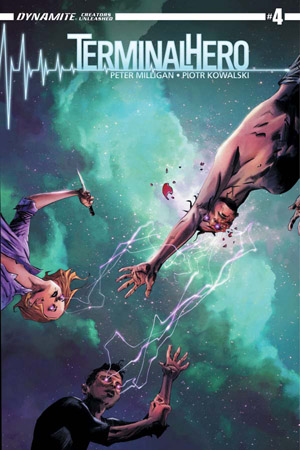 There’s not many mainstream comics in 2014 which start with the hero discussing the tumour in his head, the rape he experienced at the hands of something called The Tumor Kid and his incestuous/paedophillic urges towards his sister, but this is it. 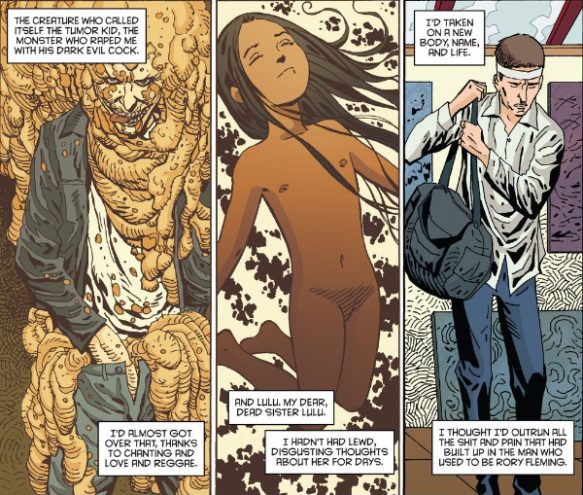 We start this issue with Rory having to realise he can’t escape the madness of his tumour, which at this point it should be obvious to anyone with a knowledge of comics that this is the logical successor to Pete Milligan’s Shade: The Changing Man. After a shaky start Terminal Hero is by far the most transgressive mainstream comic I’m aware of right now, and it’s not just because it’s dabbling with ideas you wouldn’t normally see presented in these sort of comics, but because it’s Milligan letting go and frankly, it’s been a long time since Milligan produced a comic worth reading and this is it.

The tale of how Rory transforms from a young, good hearted doctor to a man with a tumour in his head but with super-powers thanks to an experimental drug treatment, and at the same time we find out Rory actually isn’t that nice a bloke, is a wonderful bit of very dark satire/adventure. At times it reads like Chris Morris, which as regular readers of this blog know, I think that is a very good thing.

This issue sees Rory perhaps finding a potential new purpose as more people find out about Treatment Q, the drug which gave him his powers.

Terminal Hero really is about the story of Rory’s redemption not to mention his quest to just lead a life being a good man, but how this terminal cancer is shaping his life in a direction where he can help others like him.

This is a challenging comic, and many a prude will utterly hate it, but it’s Milligan on rare form operating at a level many other writers half his age aren’t able to do. I’m ashamed I wasn’t convinced with this comic at the start as it really is superb

3 thoughts on “What I thought of Terminal Hero #4”