By the summer of 1990 Neptune was still wildly successful but the cracks were showing. One of the original three founders of Neptune was leaving, Toxic! was being rushed into a spring 1991 releases instead of an autumn 91, or even a spring 92 release, and Geoff was acting weirdly in that he was trying hard to be everyone’s mate, but there were rumours he was having an affair with a girl in marketing, Viv. Even the secretary Carolyn who normally didn’t say anything too negative was joining us downstairs in the warehouse for large gossiping sessions, and Martin Skidmore was dashing around like a dervish telling anyone who’d listen about Geoff and Viv at GLASCAC.

I still carried on my by now normal life that summer so lots of going out in Leicester and London, plus trips to Glasgow to sell comics and see friends there. I’d got through that summer which meant enduring another shockingly early early exit from a Scotland side at a World Cup, but as we were going into the autumn Geoff was acting sketchy. The height of this was a shouting match between him and Viv in his office that had Martin Skidmore come down to tell us what was going on and we all sussed out what the argument was about. I later found out she wanted to stop the affair but Geoff wanted to carry it on, even though by now his wife Sarah was back at work and well, things upstairs in the office was tense to say the least. I focused on just getting on with it and making things in the warehouse tick over. By now things were running so smoothly that Geoff wasn’t needed and on the occasions he did come downstairs to help us pull comics he would end up getting in the way, so would quickly vanish as quickly as he’d appeared.

What brought things to a head was that initially I wanted a weekend off for Reading Festival that year but things were tight as Martin had left, so we were running short of people, but I got the weekend off anyhow even though I ended up not going. I think I ended up dossing around with my flatmates and ending up down the pub. This pissed Geoff off even though by this point I’d not taken any time off apart from GLASCAC that spring and frankly, what I do with time off isn’t the matter for any employer of mine. This ended up in a huge shouting match between myself and Geoff that ended up with people stepping in between us to stop blows, and resulted in me quitting the next day. Thankfully I had some savings plus my last month’s wages but truth was I played my cards too early and should have really quit just after I’d done a mart with at least a few grand in the bank to cushion the blow.

After I quit I ended up going round Neil’s house who then spent the afternoon getting drunk with me and watching the Mad Max trilogy as you do in these situations. Drinking solves all….

In September of that year the annual UKCAC was happening in London and Neil and myself had decided to go down and help out Chris and Maurice from Bristol at their enormous pitch they always had at these conventions. We’d get the coach down early on the Saturday morning, meet up with Chris and Maurice and then worry about where we were going to stay later on in the bar. That UKCAC was also the official launch of Toxic! which was a big, big deal. 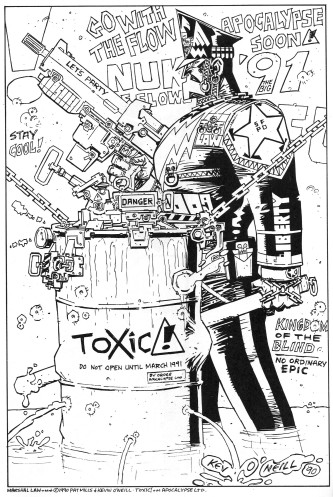 Of course Neil and myself bumped into Geoff in an awkward meeting that was made even worse by the fact that Geoff had already walked past me as I was talking of Paul Hudson of Comic Showcase (one of Neptune’s largest customers) as he was offering me a job, which at the time, moving to London seemed attractive.

That Saturday night saw us drinking in the bar, which is exactly what British conventions are like most of the time (I will have a wee winge that some cons  now seem to have lost the social aspects as they’re just marketing conferences for film & TV companies to sell you shite) so we dived in and drunk heavily. During the night we bumped into Martin Skidmore who had his two or three beers and was merry. Somehow Martin agreed to let Neil and myself crash in his hotel room which was being fully paid for by Geoff, expenses included! This was a red rag to Neil and myself so we dined deep on Geoff’s abundant wallet.

We’d heard from Martin about how things were tense at the warehouse in Leicester, and that the open knowledge of Geoff’s affair was the sneaky gossip when Geoff wasn’t around. The evening wasn’t complete though without abusing the hotel’s room service so we ordered sandwiches and beers, lots of beers, while Neil called Tod in the US which back in 1990 must have cost a fortune. Essentially, we took the piss and wallowed in it til the wee small hours. It was our one last ‘fuck you’ at Geoff which ended up with poor Martin getting some earache but he found it enormously funny. I ended up nearly losing the job offer from Paul at Comic Showcase, but ultimately Paul thought ‘fuck it’ and realised that he’d quite liked to have done the same too. Sadly the whole London experience was so horrendous (though not being at Showcase, that was wonderful and the guys there were fantastic) I didn’t last in London too long. That however, is a tale for another time.

The next morning we left Martin snoring away and wandered the streets for a bit to sober up before diving into the final day of UKCAC to help Chris and Maurice, who I’d end up helping out on a regular basis a few short months later and indeed, we still drag our old bones out for marts and cons to this very day.

Just because I had left Neptune it didn’t mean I was out of touch or didn’t know what was going on. though it did take me the better part of a decade or so to get the gory story of it’s final downfall and what happened to Geoff after it all fell apart. In the next part of this blog I’ll go into those details, including that Pat Mills story, and (assuming I can find them) some odds and sods that as far as I know aren’t online, what Geoff did after comics, and what all this meant for the British comics industry today.