The advance copy for this issue teases that Moore is going to reveal the secrets of the Crossed infection, something I’d have though creator Garth Ennis would keep for himself, but does Moore actually reveal a secret Ennis has at best ambiguous? I’ll get to that.

This issue opens with a fantastic dream sequence where Future dreams of ‘wishful thinking’ and it’s simply a great few pages by Moore and artist Gabriel Andrande.

The sense of utter foreboding Moore sets up from the start increases when on a scouting mission Future and her friends find a house made out of body parts. In fact it looks like a shrine or a temple, but the Crossed can’t be developing that sort of culture let alone the basics of a society can they?

It actually turns out to be a Crossed armory full of horrific weapons made from human bone and tissue in the middle of a village full of Crossed, and at this point Moore decides to very, very slowly transform the story from one where’s it’s been relatively slow paced to a faster, more horrific level. Moore at this point is letting us in on what the Crossed have been doing for a century after four issues of showing us where the uninfected parts of humanity have ended up. To say it’s concerning for Future and the others is an understatement. 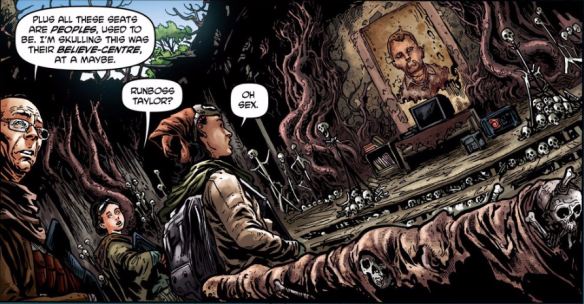 This shrine turns out to be built for Beauregard Leander Salt, a very unique survivor of the initial Crossed out break in 2008. Future finds his journals which are, frankly, fucked but they explain why this person is being worshiped by the Crossed a century later. 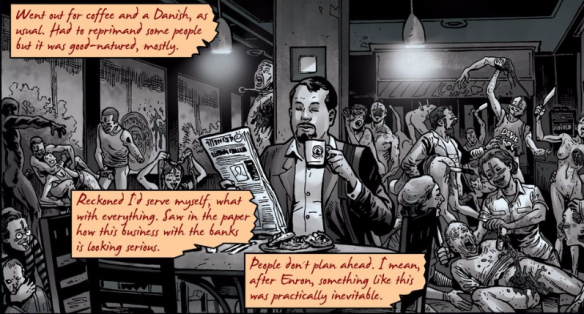 Salt is someone very unique. He’s an infected but one in full control of himself which is how he’s able to effectively tell his story of the outbreak so clearly, and it’s through this Moore manages to unload all the horror of the Crossed he’s held back on for four issues, not to mention the fact that Salt is a man clearly thinking ahead.

Does Moore reveal the secret of the Crossed? Not really, but he does reveal what’s been going on for the last four issues and sets up his final issue brilliantly. Crossed +100 #5 is a splendid issue that’s the work of someone that knows exactly how to structure and pace a story so all the buildup that’s happened before comes to a head in what promises to be a pretty devastating climax next issue.