Today is the largest mass demonstration against austerity in the UK as a march takes place in London against government austerity, and there’s also demonstrations across the UK, including another huge demo in George Square in Glasgow.

Austerity isn’t as the Tories tell you it is. It isn’t about ‘tightening our belts’ and ‘living within our means’. It’s about scrapping the welfare state and privatising everything so the rich benefit from the debt and suffering of the poor, unemployed and disabled. It’s about turning neighbour against neighbour as they fight over crumbs while the Tories wreck the country and destroy people’s lives, and make no mistake, lives are not just being wrecked but lost to the ideological policy of austerity.It is effectively an attack upon people”s rights to live.

The Independent Living Fund (ILF) is going at the end of the month.and in removing it, the lives of thousands of disabled people are going to be destroyed very, very quickly. Some might say this is hyperbole but it isn’t. In my work there are people who can no longer as of next month get to and from work, so have a choice of going on benefits or trying to make by without something that’s enabled them to live the same lives as people like myself. Of course benefits themselves are being cuts as George Osborne plans his £12 billion worth of cuts that will once and for all wreck the welfare state. 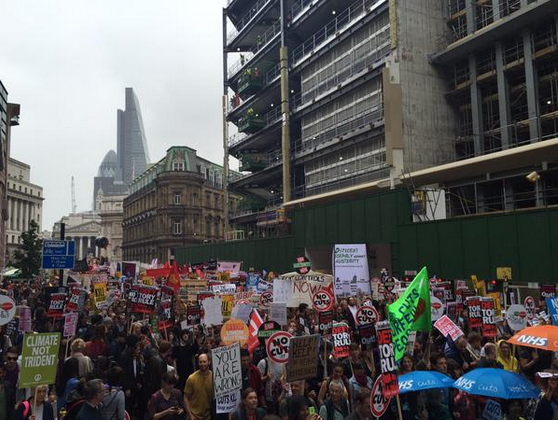 So right now in London and Glasgow people from all walks of life are joined by unions, politicians from the SNP, Greens, Plaid Cymru, and the few decent and moral Labour MP’s that stand against their own party’s support of austerity and are showing that there’s an opposition to the entire idea of austerity. They’re showing the Tories we’re not going down without a fight not just for ourselves, but for all of us together.

Follow the London even with the Livestream here, and the George Square event can be seen here.