Former British Prime Minster Ted Heath is in the news regarding allegations of institutional child abuse which for a lot of people are going to come as a shock, but if anyone’s remotely followed the deluge of stories over the years since the Jimmy Savile revelations, then this isn’t a shock at all. The problem is I’ve done a blog like this before when I discovered the stories about Leon Brittan which haven’t just been validated, but are now under investigation. So again I’m going to say that all the stories throughout the years about various high ranking celebrities and politicians have finally caught up with what in some cases has been subject to rumour for decades.

What’s a bit synchronous about the Heath story is that it’s broken when I’ve been re-listening to Monty Python’s albums from the 1970’s and Heath is a figure they make fun of a lot.

There’s also a bit of sly winking the Pythons do as the refer to Heath during their TV programme as a ‘bachelor’, an old code phrase used on some people to describe them as gay. There’s also Private Eye who made the odd jibe over the last 50 years about Heath’s sexuality…. 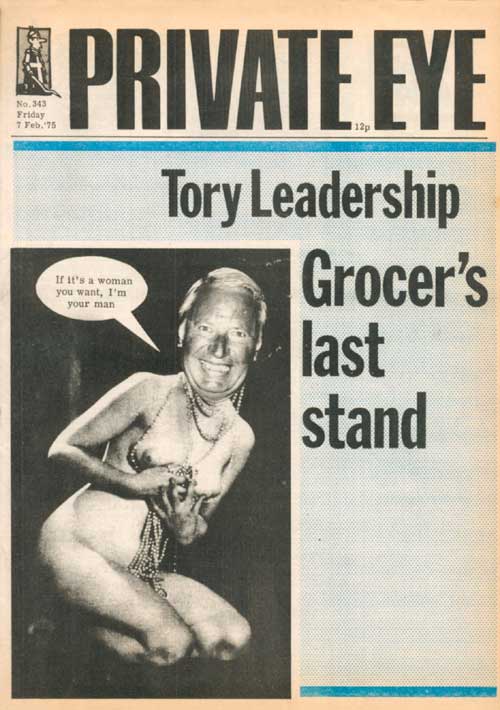 Like Leon Brittan and Jimmy Savile the rumours that have been dismissed, attacked and condemned have actually been investigated, and like Brittan and Savile there were chances to go to trial when the accused were still alive and all of these people were not. Instead after their deaths (in Heath’s case, long after his death) little snippets of what may be the truth come into the public domain thanks mainly to independent journalists from Exaro who have been doing some amazing work on this subject.

But again people have to stop and ask why if these rumours were flying around then why didn’t Fleet Street editors or Westminster correspondents fail to dig into these stories? Of course the answer is that as part of the establishment they helped cover up what is increasingly looking like a series of crimes ranging from child abduction, rape and murder. It’s not as if stories about Heath weren’t mainstream as this New Statesman article reveals that Heath was advised to stop his cottaging activities so he could become a Councillor in the 1950’s.

At least this is by far the most powerful name brought into this story that sparked up with Jimmy Savile, however the rumours about Heath also involve Savile who it is alleged procured children for Heath and other powerful men. The truth of those rumours is uncertain but I’d be more willing to believe those stories three years into the slow uncovering of some shocking details of institutional child abuse.

I’ve no idea how this is going to end but its clear the British state has been sitting on these stories & actively covering them up for decades but while these revelations are a good thing Heath is dead. He can’t stand trial. Britton is dead. Savile is dead. Now a shufty at various conspiracy sites or five minutes online will reveal names of other living high ranking politicians from the Tories, Labour and other Westminster parties not to mention the Royal Family involved in this. Perhaps it’s time to actually put to trial a suspect that’s actually alive and if found guilty can not just serve time, but help uncover the scale of something that it seems we’re only glimpsing a fraction of.

1 thought on “About those Ted Heath rumours…..”