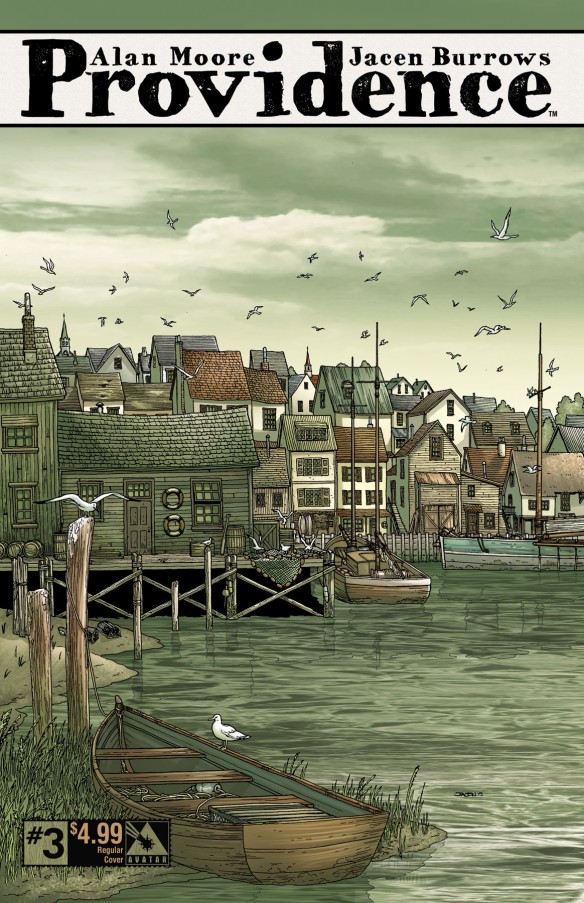 In the month between this issue and the last one I’ve been desperately brushing up on my Lovecraft history which means as this is the 21st century, looking at YouTube. Most Lovecraft videos there tend to be pure shite, but this rather good one called Fear the Unknown is worth a watch, especially as it’s got some interesting points from Neil Gaiman.

Back though to this issue as Robert Black visits Salem, yes, that Salem with Moore and artist Jacen Burrows still sticking to a rigid four-panel horizontal grid for most of the pages in the ‘ordinary’ world. But it’s an extraordinary time with WW1 not long finished and prohibition being discussed and the town of Salem has some very strange people living in it.

Black’s looking for a Tobit Boggs, another rather odd looking local with a lone in disturbing little curios and equally disturbing friends.

Like the previous issues Moore spends a lot of time having his characters indulge in what is essentially exposition, and in lesser hands this would just be painfully slow and turgid but Moore manages to make things seem increasingly ominous. It’s also helped that Burrows is turning out the work of his career by managing to make what is historical places seem contemporary, not to mention creepy. Especially as little bits of historical foreshadowing is dropped in here and there.

Then Boggs takes Black into the tunnels…..

This induces a quite disturbing dream for Black not to mention the reader as horrors both real and fantastic are laid out in Black’s dream but it’s the final scenes as Black is leaving via the only bus in town that are quietly unsettling. In fact Providence is becoming more and more unsettling with each issue not to mention it’s also building up into a seriously substantial work by Moore who refuses to take any easy options with cheap gore and violence. In fact it’s been bloodless with barely a hint of violence so far but it’s still a damn sight more scary than the majority of horror comics on the market right now.

Basically if you’ve not picked this up do so now because I think you’ll probably regret it.

10 thoughts on “What I thought of Providence #3”