At the end of this first arc by Si Spurrier the settlement of Murfreeboro is threatened by the Crossed unless they give up people for them to rape, torture and mutilate, or are they looking to do something else with these people they’re getting from towns? Fortunately Future Taylor has some totally unexpected allies in the shape of refugees she presumed to be Crossed disguised as normal people. 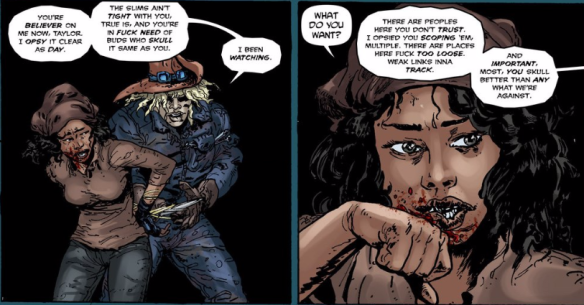 Sadly the Imam is set upon a peaceful settlement so calls upon people to pray which is not going to stop the Crossed from cutting your balls off and wearing them for earrings. Sadly after a coup upon the Imam’s regime (aided by Future) it blows up in her face as her fellow insurgents aren’t going to take the fight to the Crossed, but instead give them what they want.

After seeing Cautious escape in the balloon Future loses much hope of the future, and for the first time in this series, we’re made to fear for the fate of someone that’s become essentially a hero in the world of the Crossed. Especially when Spurrier has her drop the narrative Alan Moore established in his first issue. 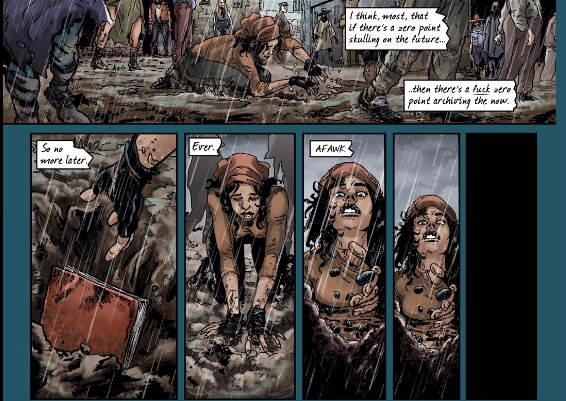 From here on in it’s about survival as the Crossed come to take their ransom. 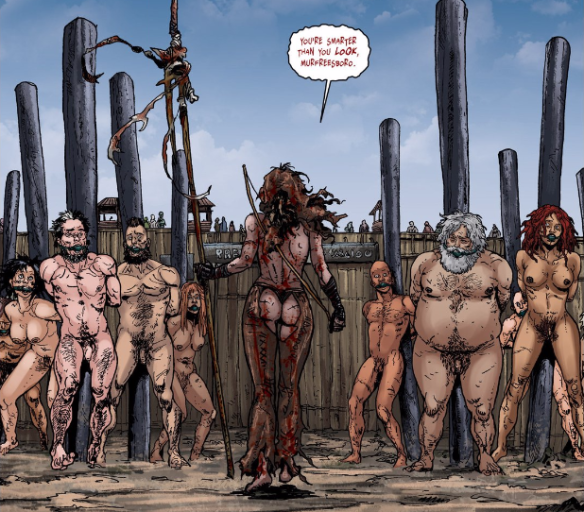 Though things don’t go as expected as Spurrier plays with expectations, so the end of this arc doesn’t end as expected, In fact, it’s horrible and hopeful at the same time as humanity may just have found a way to take the fight to the Crossed rather than let them come to us.

I’ve found Spurrier’s first arc after Alan Moore a little bit harder to get into, but it’s hit a head of steam outwith of the dodgy art in the last couple of issues, but I’m happy to say Fernando Heinz is back for half this issue as I feel he suits Spurrier’s story well, plus his vision of the Crossed is vastly different from any previous version I’ve seen.

All in all this is a vastly satisfying final issue of this arc that promises more from the next one. Spurrier’s really getting into his stride and I hope this quality continues next issue.