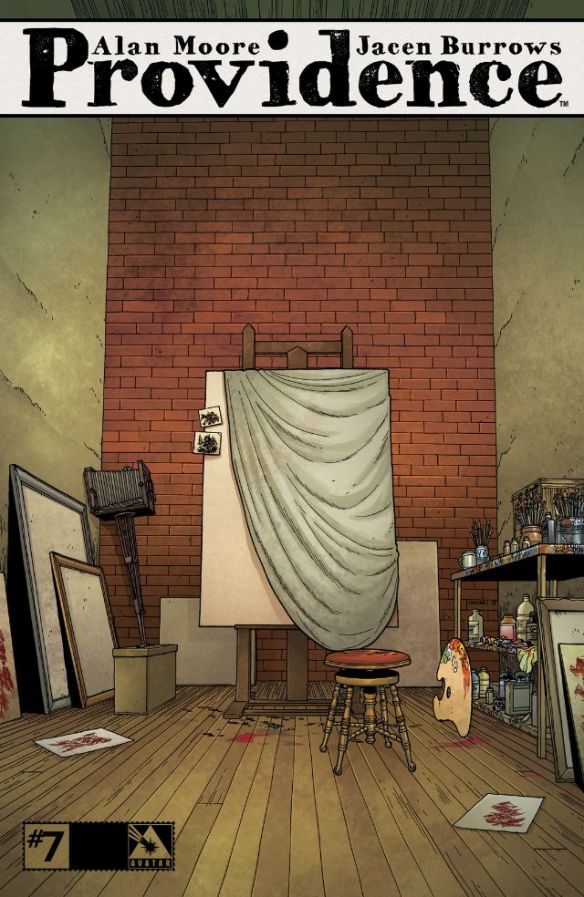 Alan Moore and artist Jacen Burrows journey through H.P Lovecraft’s world saw the last issue end with protagonist Robert Black being violated both mentally and physically which was culmination of the story that was taking Black into some dark places.For Black that means having to confront the possibility that he’s losing his mind and that in fact, he did something terrible.

Arriving in Boston during a riot thanks to a police strike, Black is searching out a photographer named Pitman, and thanks to a striking policeman by the name of Eamon O’Brien. Upon arriving at Pitman’s house, Black is given a bed  to catch up with some much needed sleep. The next morning Pitman gives Black an explanation as to what possibly happened to him.

Befriending Black, Pitman explains that the people he’s been meeting in previous issues can affects dreams so they can affect people when they’re conscious, which tied into the secret societies and occultism Black has been researching makes Black think he’s just hallucinating. Pitman though explains that everything isn’t as he thinks as there’s a world between ours and the underworld that some can access, and even bring people from other realities into ours. Something he proves to Black by introducing him to one of these beings.

This issue isn’t as shocking or horrifying as last issue as Moore goes back to the slow burn of previous issues, but that cloying feeling of impending dread hangs over this issue like a black cloud. Black is pulled back from the hysteria of his situation, but now he feels he’s hallucinating or being hypnotised one feels that the truth of what is going on will destroy what is basically a decent man.

Moore and Burrows aren’t taking easy shocks here, outwith one of the few appearances of a monstrous creature who seems more of a force of nature than evil. With five issues to go, it feels like Moore’s setting Black up for an almighty fall that is going to shock us, and if it’s anything like the previous issue of this splendid horror comic then it’ll be something dreadful indeed.

6 thoughts on “What I thought of Providence #7”