The last ten days or so have been a bit mental for me after having, then recovering slowly from having a stroke. In that time it seems the UK has went insane. The EU Referendum has been called for the 23rd of June and has quickly established itself as the Scottish independence referendum’s mad old racist uncle that comes round once a year. David Cameron moaned about Jeremy Corbyn’s suit. Jeremy Corbyn didn’t stand with Nicola Sturgeon or Leanne Wood as he didn’t want to be seen with ‘nationalists’, and some monstrous abortion of decency called ‘Clean for the Queen‘ has been vomited into existence.

I mean look at the sheer state of this;

There’s a man that doesn’t realise the camera thinks he’s a prick smiling at the camera in the vain hope the camera doesn’t explode.

And as for this; 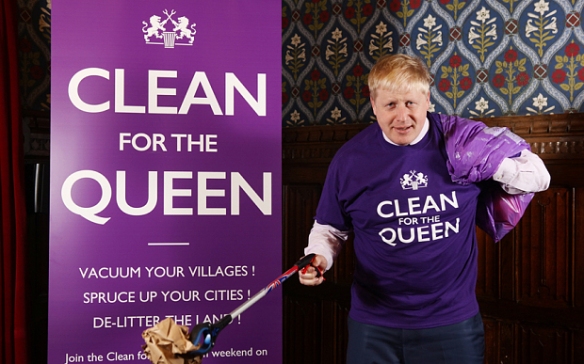 A man that’s never done any manual labour in his life telling the plebs to graft for their Queen, and here’s the problem. Keep Britain Tidy is fine. It places the emphasis on us all to tidy up after ourselves. Clean for the Queen is offensively patronising as the idea that in the year 2016 we’re to clean up for the woman that owns vast chunks of the UK and that got her position by an accident of birth.

It’s simply Tory bullshit. There should be local council staff to clean up parks and streets but the Tories have laid them off, so rather than deal with that we get this faux-World War 2 nostalgia that we should be good little subjects and graft unpaid for a woman that can pay well, well above the living wage but after a Daily Mirror story found herself being forced to pay a living wage.

Clean for the Queen is everything wrong with the British state and the dismal state of the country right now and we’ve got months of the EU referendum campaign to grind out. Thankfully there’s some hope that at least Scotland may help either swing the vote to a remain or branches off to it’s independence if this map from YouGov is anything to go by.

So please, when you see stuff that’ll make Clean for the Queen seem like a republican message over the next few months try to remember that this bullshit nostalgia is just another way to frame austerity as a positive, and that in this year of 2016 you don’t tug your forelock to people like Boris Johnson, Michael Gove or their Queen.