Macmillan have released figures which show there’s a cancer survival gap between poorer and wealthier parts of Scotland. That’s a pretty damning statistic and one that any government has to work to solve because a person shouldn’t be at risk of dying because they live in a poor area or are poor themselves.

I’ve just been told I’m in remission after discovering I had cancer last year when I was still living in Bristol. I now live in Dennistoun in the East End of Glasgow as I spend some time recovering and recuperating. Dennistoun is by no means a desperately poor area, but it wasn’t as wealthy as where I lived in Bristol on the Gloucester Road or even Stokes Croft. It’s an area going through gentrification due to it’s close vicinity to Strathclyde University and the city centre (five minutes car/bus, 15-20 minutes walk) and a pretty cheap rental market (a 2-bed flat is as cheap as £500 p/m), relatively cheap houses/flats to buy in an area increasingly becoming full of Hipsters, young professionals and students. What though has this to do with Macmillan’s findings?

There’s a quote from the article linked at the start of this blog and I’ll highlight it here.

I’ve had a few physio sessions to help with my stroke recovery (its been a year since I had a stroke) in Shettleston health centre. This is Shettleston. 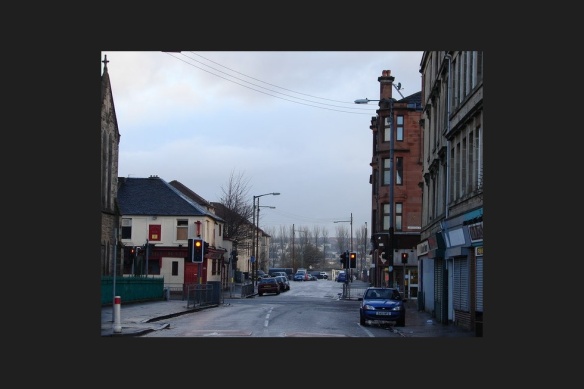 It is a poor area that’s been left to rot. It’s also ‘famous’ for having a desperately low life expectancy  but it is slowly improving. It isn’t ‘poor and edgy’ in a contrived way that say, Stokes Croft in Bristol is, but it’s just poor and edgy.

So here’s a couple of truths that’s dawned on me since returning last year and undergoing cancer treatment and stroke recovery.Poverty kills people. Having to deal with a potentially life-threatening illness is a full time job in itself, and if your support structure is weak, or you simply live in a poor area that hasn’t got a good local butcher or fishmonger, and you can’t work anyhow, then it becomes an additional struggle on top of your daily struggle. I’ve seen the sort of poverty in the East End of Glasgow that I thought no longer existed in the UK and it should shame us all that people live in such conditions but we’re also very good at screening this sort of poverty out.

Here’s the big one though; if you’ve suffered generational poverty and never seen your life get better and your basic human self-respect has been whittled down to nothing then you won’t put in the same fight as say, I did. I’ve lived in a nice wealthy city for 17 years. I’ve been lucky enough to have my life saved by some brilliant doctors and nurses at the Bristol Royal Infirmary, and I’ve got enough to live for, to fight for, to make me want to go through what has been an awful year. But what if I was say, living in a poor area resigned to my fate? You may think people don’t fight and won’t give up but I’ve seen it since returning to Glasgow. It shocked me into a realisation of just how lucky I’ve been in life that I can still walk with some pride in me. I’ve seen people crushed by the weight of their lives so they’re giving up before the fight has started.

That quote, Health inequality is closely linked to income inequality is important. If people don’t have the same chances in life, then they won’t get the same chances when they’re fighting for that life, and if you’re used to losing then what’s the point? This shouldn’t be a party political issue and I don’t care for the SNP and Labour throwing jibes at each other. I do think independence is something that may, and should help, but the fact is people have to be taught how to live. They need chances. You shouldn’t have a larger chance of dying because you’ve got a postcode in an area where poverty is rife? We need to make a better world for all, and whether or not we agree on how to get there, there’s an urgency here. I said this is generational and it is. Children born just over a mile from where I’m typing this now won’t live as long as I have because of where they were born. That isn’t right and to make things better it means people from all sides have to confront hard facts and that won’t be easy.