The ongoing car-crash that is DC’s Rebirth (DC’s attempt to integrate Alan Moore and Dave Gibbons Watchmen into the mainstream DC Universe and blame it for everything ‘dark’) continues with Batman #21, a comic that makes the Watchmen link very, very obvious from the off. 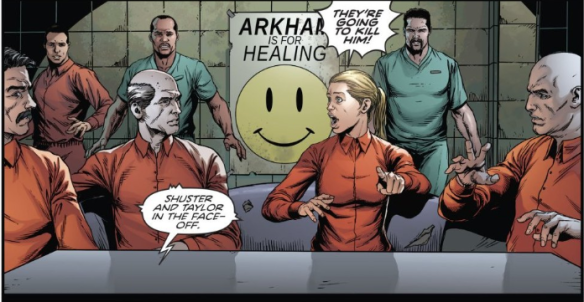 That’s Saturn Girl of the Legion of Superheroes who has been locked up in Arkham Asylum since the Rebirth reboot started.She’s a telepath from the future so has knowledge of the 21st century and can read minds, so she knows (we think) what’s coming. As for the reader what’s coming is a bloody unsubtle reminder of what DC are doing with Watchmen.

A brush with the Psycho Pirate’s mask sees Bruce Wayne encounter his father, the Batman of Flashpoint.

Bringing the Flashpoint Batman back for a glimpse reminds us of The New 52,one of  DC’s previous attempt to reboot its universe in a ‘gritty’ way. it’s also blamed for generally poor sales and the company struggling before leading to Rebirth last year.Anyhow, after contacting The Flash, Batman ends up in a fight with the Reverse-Flash as it’s hinted that a ‘power’ (Dr. Manhattan?) brought him back from the dead.

So we get a few pages of Thawne beating up Batman (MORE VIOLENCE!!) before Thawne finally wins thanks to The Flash being late. Picking up the Comedian’s badge does this to Thawne…

That does look like a Dr. Manhattan style ”BZZT’ there. Unfortunately for Thawne he comes back a tad worse for wear. 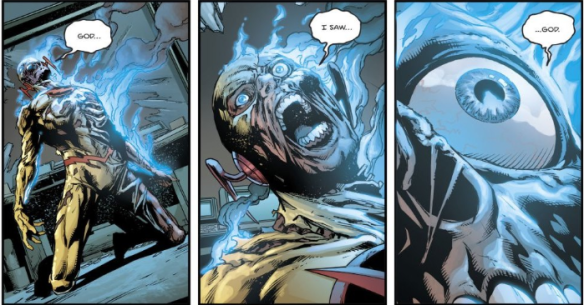 The story picks up in The Flash #21 due out next week but it’s clear DC are pushing on with the integration of Moore and Gibbons work into the DC Universe even if its clear they don’t seem to really have got or understood Watchmen, or what Moore and Giibbons were doing with their work. I don’t blame writer Tom King as he actually does a pretty good job in working with a shitty stick to create a pretty reasonable superhero tale, but the entire idea seems seedy.

I don’t think the higher-ups of DC get how integrating Watchmen changes the meaning of it, but they are counting the praise for that work rubs off on titles like this. It’s a bit like the Fearless Girl statue in New York and the controversy around that. This is just simply another example of late capitalism of course, but as a sales tactic it’ll work as already on Ebay issues of Batman #21 are being advertised at stupidly high prices.