I’ve had a busy April doing fun and tiring stuff so I’ve avoided real news as much as possible but watching the Alfie Evans case unfold like some modern horror story is something that has made me worried as to where we’re going in the UK in 2018. The short version of the story is the parents of Alfie wanted to try unproven treatment overseas in an attempt to keep him alive, but his condition was such that his doctors wanted only to give him palliative care to make what was left of his life as easy as possible. A long legal battle took place and that’s hit a climax this week when doctors took Alfie off life support as keeping him alive would have been causing him pain.

All in all a pretty sad case where the desperate wishes of parents meet the reality of science and the human body however the case has been used by groups who don’t especially care about Alfie, his parents or the facts of the case.Things like this for example. 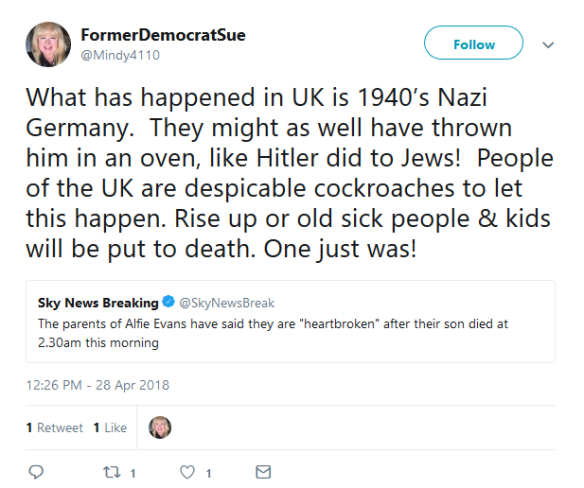 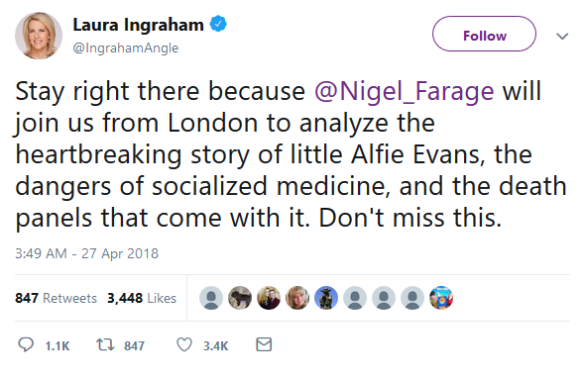 The entire story is bleak and depressing. The hard/far right mixing with Christian fundamentalists (though there’s a crossover of both here) using Alfie Evans in whatever way they want to make their case.against the NHS, the very concept of socialised healthcare and the entire principle of scientific medicine. These same people have whipped up hate against the doctors and nurses of Alder Hey hospital while making a complex debate so emotionally simplistic that instead of weighing up the arguments everything is boiled down to horrible polarity.

And in the middle of this is a small child and his parents being exploited by frankly, some utter scum. If you were to look at a single example of how awful times are today then you probably couldn’t find a better case than this.