I am broken today. Two comic conventions in as many weekends and no break has pretty much outlined my limits post-stroke but thanks to events outwith my control I only have one more event this year before being thrust into the year 2019 where lots of things may be happening.

But the latest show I’ve done was probably the weirdest place I’ve done one in 35 years (and that includes nearly selling comics at Glastonbury) which was Mark Millar’s old primary school, St. Barthlomew’s, in Coatbridge. Upon driving to the school it dawned on me and my driver Jordan, that it was a fucking primary school, and that means everything in it would be wee, and of course it was. So big hefty units such as myself squeezed into tiny wee chairs meant for frames far, far, far younger than us. Also,we expected to turn up and for the dealers to be in a central gym or hall but we were strewn through the corridors of part of the school like discarded Panini World Cup 2018 stickers.

Luckily I ended up with a spare table, so managed to take over the end of one such corridor like this. 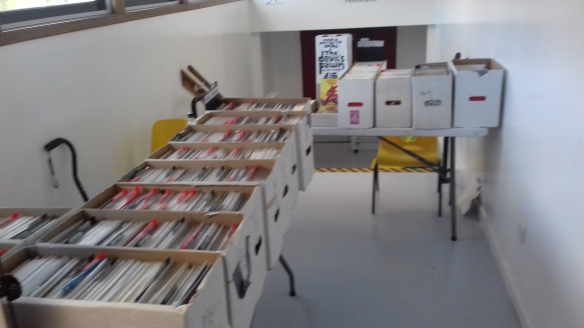 Plus I was positioned next to someone I’ve only spoken to online, so it was nice to put a face to the name and as the doors opened at 10am that was consolation for the fact nobody came to where we were. but with a wee prompt for the staff, and some carefully placed arrows, there were soon people coming up our alley for comic, and comic-based, delights.

And I ended up having more fun (while obviously making enough money for the day to not just pay for itself, but so I can put money in the bank) than I was expecting as it wasn’t just the faces that have become familiar to me over the last year, but loads of kids who were attracted by the impressive spread Mark and his staff had laid out with lots of guests like Frank Quitely, Leah Moore and cast members from Still Game and Burnistoun. Many of these kids had no idea what comics to collect having just come down to see what was going on, or come with a mate. I was taught years ago by someone wiser than me to encourage the kids because if you don’t, there won’t be an audience in the decades to come.

And that’s what made this event something a bit different, and a bit more fulfilling than just flogging comics to folk. Keeping the flame burning and passing it on to kids, boys and girls, was great but it’s worn me out . As for the show overall, it’s always hard to say when you’re stuck behind your tables, but people clearly enjoyed it and although there were problems (the cramped space being the biggest one, and although some of the issues were teething pains some things will need to improve if there’s a next time. Having a free for all for tables at a show where to be honest, too many tables were sold, was a big mistake especially when dealers left better positions very, very early in the day leaving some areas virtually dead)  I’d do this again next year.

But I’m done for now. One more show this year, which means I can regroup and plan out 2019 a bit better than just letting it happen and hope for the best which to be fair, is how I’ve led my life up to now but look where that’s led me!?!