It’s the Tory Party conference this week and the full horror of our potential future is beginning to take form as Boris Johnson further manoeuvres himself towards the position of Tory leader, and Prime Minister. 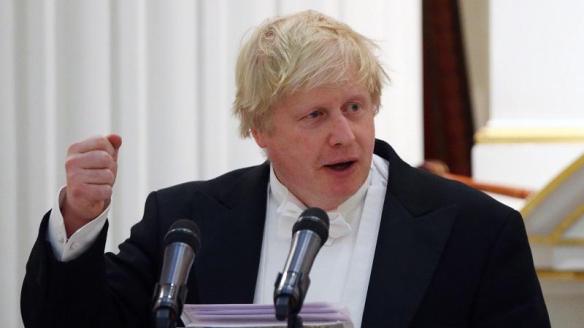 As Johnson cosies up to fascists and extremists while pushing populist rhetoric which in normal times would be dismissed, but we’re no longer in normal times, we’re on the verge of something very, very awful. With a media that’s built Johnson up as some sort of jolly buffoon rather than a callous sociopath only interested in himself and his vision for the UK which is ripped from the sort of imperial nonsense that would have been rejected from boys comics of the 1920s.

In fact there’s another figure of the 20s and 30s we can draw a comparison with.

But Johnson didn’t appear on the scene spouting racism (well, sort of) and playing the populist ethnic nationalist. It has taken a long, long time for Johnson to get to this stage where I think we’re seeing what he is exposed for all to see and you either are repulsed by it, or his cries to a Britain that never was draws you in.

And this brings me to this Alan Moore quote from V For Vendetta.

“Since mankind’s dawn, a handful of oppressors have accepted the responsibility over our lives that we should have accepted for ourselves. By doing so, they took our power. By doing nothing, we gave it away. We’ve seen where their way leads, through camps and wars, towards the slaughterhouse.”

Johnson terrifies me. He’s surrounded by zealots who unthinkingly drag us ever closer to that dark place that in a way, is the logical end for the British Empire and the idea of British exceptionalism as it finally gives into full fledged fascism. And we walked into it.

There’s only a few months left to even try to stop this. Petition your MP, MSP, AM or whatever your local elected representative is and make sure you do what you can to stop what’s coming. Don’t be guilty of giving it away because we know where that leads.