Apart from making sure there is a comics industry of sorts in the UK, Pat Mills  is the writer of Charley’s War, the best British war comic ever made.

Great War Dundee is a new comic which is part of Dundee’s commerations of the Great War and the story of the 30,490 men from that city killed in the war, and the impact upon Dundee. In there is a strip by Pat Mills with art by Gary Walsh called Ragtime Soldier, and it is pure Pat Mills in that it tells a great story, as well as being fucking angry because you shouldn’t be writing about WW1 without getting fucking angry. 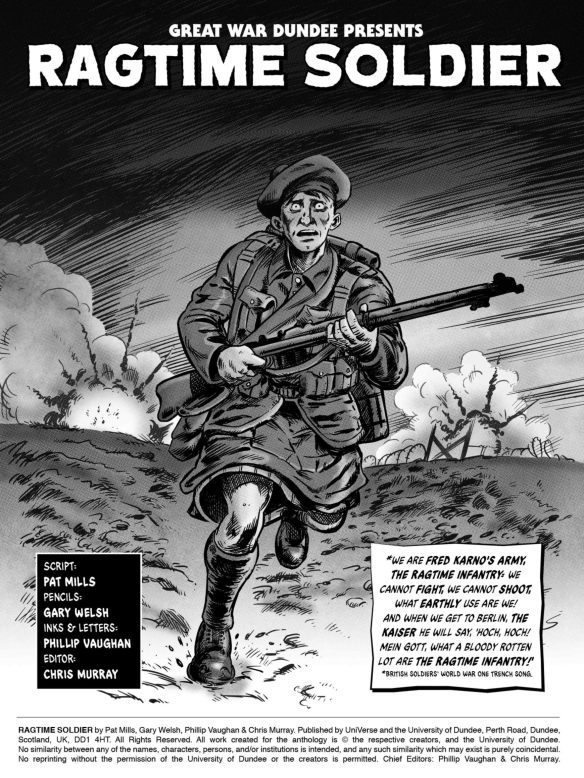 See, there’s one thing Pat drops in here that I’ve read rarely about but is a thing my parents used to talk about which is the Great War’s insane death toll was due to those at the top of the British food chain’s desire to cull the working classes. It’s shocking to see in print because (as Pat often says) the history of WW1 has been frantically rewritten since 2014 especially, and now we see things like the Somme being rewritten as a ‘sacrifice’ for a great cause. Essentially the descendents of the bastards who sent men to die arecovering up the crimes of the past.

Many of those same people are behind Brexit, which is again I think a way for the ruling classes to thin out the population, especially the disabled like myself.

Anyhow, I recommened clicking on this here which will take you to Pat’s site where you can download Ragtime Soldier for free. Please do so because I would love to see more not to mention seeing this sort of rage in a British comic.

1 thought on “Read Ragtime Soldier for some truth about WW1”