Today, 35 years ago Live Aid happened featuring two huge open-air concerts in London and Philadelphia and global hunger was wiped out overnight making the world an almost utopia. Except it didn’t. So let’s be blunt from the off; as an event to help people Live Aid’s reach was limited, and although aid did get to people, it also got in the hands of warlords who bought guns and other weapons who then proceeded to murder tens of thousands of people. Bob Geldof’s successor to Live Aid, Live 8, ended up siding with Western governments allowing them a shield to back off doing anything real to wipe out Third World debt.

Of course, people giving money in 1985 didn’t know this. I bought a copy of Do They Know its Christmas? like millions of others thinking my few quid that I’d spent on a frankly shite record (which has long, long been sold off) would actually do something. I’d dabbled with the idea of getting a ticket and going down with some friends but I bluntly, shat myself about going down to London myself, spending a day in Wembley, then heading back to Victoria in the wee hours to wait for the bus back. A few years later I wouldn’t have blinked about it, but it is a regret as we had people who’d come into the shop I worked in who could have easily gotten tickets.

In those pre-internet days knowledge that Live Aid was not doing what it set out to do was in circulation, though hard to get but journalists were at least aware on both sides of the Atlantic there were problems. The problem was the narrative was written in stone. Bob Geldof was a saint, and his free-market vision of aid relief might involve giving millions direct to a butcher but let’s skim over that so we can feel good after all, it’s better to be kind than pick Geldof and Live Aid apart because they did help people?

And here we are 35 years later still being fed the same narrative. Yet for all my moral outrage at what Live Aid, and especially Geldof, is actually responsible for, I’ve been constantly drawn to the Live Aid concert itself as possibly one of those moments which helped shape the next 35 years for me in selling me the idea of large open-air festivals such as Glastonbury. 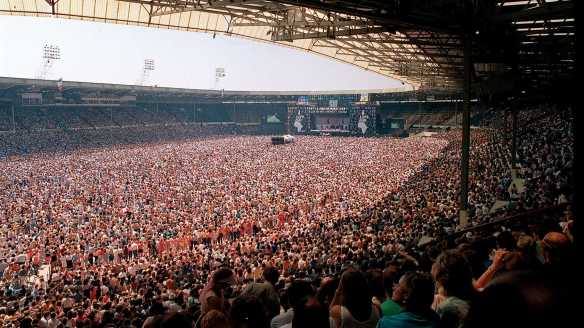 As for me on that day, I remember having to pop into work to help deal with a delivery but managed to get away so I was home by midday to watch the start of it which then saw me stuck in front of the TV for the next 14 hours or so. I witnessed poor Adam Ant single-handedly destroy his career to Queen dragging theirs out of the gutter. Watching it back today little of it stands up musically, nor do many of these acts know how to play to a crowd of 100k. Queen was one of those exceptions as was David Bowie who was going through his megastar phase before making the horrible mistake which was his career from 86 to the early 90s. I still shudder at Tin Machine which reminds me I must tell my Tin Machine story one day…

But that day was about spectacle, not to mention the actual technical marvel of putting the thing on, and the BBC showing it to the UK in those early days of satellites. A lot of what was done that day pushed technology on so that just a few years later satellite TV became a thing and you’d see dishes go up on the sides of houses of the few who could afford it back then.  It was amazing to see things flit from the UK to US and back again. Who cares that many of the performances were poor, it was the spectacle which mattered and looking at the continuity back then it’s clear that was how it was affecting people who were there.

Of course there were some things which did happen. Most of the acts saw their careers either blow up like U2 or Madonna or come back from the dead like Queen and Status Quo. Others saw careers prolonged for a year or two longer than they should have been with Adam Ant being an exception.  Live Aid also saw how music changed for the latter half of the 80s so that these big acts dominated to the point where chart music stagnated. No wonder the breakthrough of rave and Indie music in 89 was lapped up as we’d struggled with that post Live Aid bubble.

35 years later the legacy of that day beyond the memories people have of it as a glorious spectacle is complex. Geldof has clearly profited in terms of relevance since then as in 1985 his 15 minutes of fame was well and truly up, but his move into international politics is going to either make him a saint or hang like a set of chains depending on how you’ve informed yourself. Most people though see him, and Live Aid/8 (I remember Geldof appearing at Glastonbury in 2005 being welcomed uncritically on the main stages, but elsewhere you’d be able to find opposing voices to what he was doing, not to mention that both concerts are lacking in black acts) are purely noble causes and not the complex mess it really is.

Still, musically if you’re an act looking to play a big festival you can do worse than using Live Aid as a guide as to how to do it. Queen and U2 are your guides.