Glastonbury Festival took a year off in 2006 though Julien Temple’s documentary Glastonbury made up for the lack of a festival, it was still good to return to Worthy Farm to meet old friends and make new ones as our little band started to grow. 2007’s festival had an ok line up, but the Pyramid Stage was naff, with only a few nuggets among the chaff, and of course The Who were closing the weekend off so that was essential. It did end up unfortunately being one of the most oppressively miserable festival experiences I’ve ever had but I’m getting ahead of myself.

This year I went down with my friend Janet who picked me up in sunny Bristol, well, when I say ‘sunny’ what i really mean is pissing rain. This was the first thing which should have set my Spidey Sense tingling but it was a wee bit wet when we headed out on the Wednesday morning very, very early. Janet is registered disabled which means she could grab easy access, which meant we drove past all those annoying queues and went right down to the front near one of the pedestrian gates. Smashing!

After a wait which wasn’t too long in what was now a lovely sunny summer’s morning, the pair of us got the nod from a sound security guard who advised us to grab our stuff, and head to the main gate to get in. After another short wait the doors opened and all the disabled folk and their helpers (or blaggers like myself) wandered onto the site, found the spot we’d set up in 2005 and in the wind, put our tents up and waited for everyone to show their faces. This included Jan who was a new face, as well as Barry and the crowd from Scotland in all their translucent glory.

Eventually we all set up, got to know each other again and I picked up a cold after an especially late, but fun Wednesday night chatting, eating burgers and getting to know our neighbours from London and Australia who were fantastic all weekend. As it turned out, it was good we had nice neighbours because nice things were at a premium at this year’s festival. I’ve mentioned before in these series of blogs how the festival had changed, and especially how it’d become very different in terms of the people attending as it was now ‘one of those things’ wealthy people do to say they’ve done it. Also what was a problem was the drugs had changed because of this new demographic. When you’ve not got much money you’re happy with a wee bit of speed, a few pills and if you’re really, really luck some coke which is probably cut with baking powder anyhow. The wealthier people, not to mention the fact large parts of London decanted there for the weekend (as does Bristol) meant the rise of ketamine, which meant seeing kids wandering around having shat themselves and frothing from the mouth. Any drug that makes you shit yourself frankly isn’t any fucking fun, but for some reason I noticed a lot of ketamine casualties in 2007.

This however wasn’t too much of a problem where we were. The neighbours were on the whole, nice people, our crowd were jolly together and by the Thursday we were up for the festival even though I was struggling with a developing cold that only beer could get rid of. As long as it didn’t rain I was ok. Then it started spitting on Thursday night……

I went to bed on Thursday with the sound of rain battering on my tent and the thought that ‘it can’t be like 2005 again can it?’. Well, it wasn’t. In fact it was probably worse. The flooding was everywhere again.

The skies were grey and angry. It was raining on and off. Parts of the site were waterlogged, flooded and muddy and dear fuck, there were crusty jugglers being cheery not far from where we were camped. It was a miserable start to the Friday and the festival proper, which seeing as now people were flooding in from the Wednesday was meaning that a lot of very annoyed people strapped on a fake smile and did what they could to enjoy themselves, myself included.

So full of false bonhomie I got dressed for the conditions feeling like I was Arnold Schwarzenegger in Commando getting ready to kill a load of bad guys in a variety of horrible, but fun ways, but substitute ‘bad guys’ for ‘mud’. Out I plodded with a rucksack full of toilet roll (always carry toilet roll at a festival), water and beer (always carry beer) and headed into the rain to have fun!

I tried to have fun. I really  did. But when you’re watching Amy Winehouse mangle her way through a set with the rain pissing down and the water seeping into your boots as the mud slops into them then it’s very fucking hard to have fun. Very hard indeed, but I tried hard but I spent most of Friday giving up trying to watch bands on the main stages because it was so muddy, though the rain did stop and it did dry out enough in some places for a bit, at least, until the next bout of rain came pissing down on us. Friday ended with Janet and some of the others watching Bjork being alright. In fact the best I can say about any of the acts this year is they were alright, but The Who weren’t alright, they were as far from alright as you can get.

I again. get ahead of myself.

Saturday broke in a gloomy haze and brown people walked in a brown world saying brown things as the mud dominated everything. those parts of the site which had dried out were actually a brown, sludgey mess, and getting around was a chore and a half. 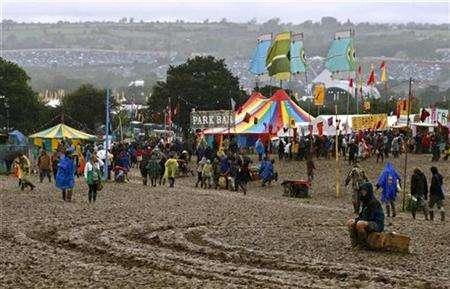 I only saw a few bands on the Saturday choosing instead to spend most of my time in the comedy tent, but I did see Babyshambles who were indeed, a shambles. I’d loved The Libertines so to see Pete Doherty become a fucked up caricature of himself with some of the most oppressively loathsome scum in the London hipster/drug scene egging his wankery on was depressing. I left when Kate Moss sauntered on to ‘sing’.

The evening was about comedy, though Iggy Pop and the Stooges provided the one, real, true highlight of the weekend putting on a show that was completely immense. After that we headed back to our campsite for the night, only to be whisked away by a couple of our neighbours for a bit of fun (this is a blog all by itself!) down Shangri La til well past dawn. As I left the others coming down in a muddy field and walked back to a slightly less muddy field, I stopped off at the long drops before grabbing some sleep.

As I sat there trying not to nod off, the first drops of rain fell in yet another shower. I headed off to sleep happy, but fed up wading through sloppy or sticky mud.

Sunday was the last day. The general mood in the camp was enough was enough but we wanted to see a few things so decided to leg it early on Monday morning which was fine by me but only after I saw The Who. Sunday at festivals is always a slow start, and this was no exception but the showers had stopped and it was actually sunny, so taking advantage of this I stomped off to the Leftfield to see Tony Benn and Mark Thomas. Sadly the tent was rammed, so the only place to stand was in the mud, sinking slowly of course.

After bumping into a mate from a comedy forum I used to post on and chatting for a bit, I headed back to camp to get changed, chat say cheerio to our neighbours and get ready for The Who.

Then it started raining. It was also cold. I was low on beer. I had no clean underwear left. The Who however would make things better!

As i stood there in the field in front of the Pyramid Stage with the rain lashing down in the cold summer evening to a bunch of nearly pensioners try hard to sing ‘hope I die before I get old‘ while acting like old reactionary tossers, and generally being utterly bloody rubbish. Now for those who enjoyed their set or who weren’t there I’ll try to make it clear that I love(d) The Who. They were a band I adored as a kid growing up. But watching them in a cold rainy night in a field with the bevvy running out and the band generally being quite shite was a crushing disappointment. I felt like I’d been spending Christmas with a bunch of uncles who all smelled of spirits and wee who constantly told you how things were better in their day.

I endured the end of The Who. Sank my last beer. Walked back to the tents where Janet was intent to go at dawn the next morning to beat the rush and before the rain really kicked in. Unfortunately about an hour later the rain really kicked in and it pissed down so that the next morning I got up and looked at my tent which has survived nine years of festivals and decided to leave it as the Festival was going to give abandoned tents (they ended up not doing this) to a charity to distribute in disaster areas. This shaved some time off our packing up time and like 1998, I made my escape from a festival which was a proper rollercoaster of a year.

Getting home, I was muddy, fed up, cold and miserable. I had a bath, some kip and headed out for a pub lunch before having an early night and wondering whether I’d bother with going in 2008. After sleeping on it I decided nah, I’d go but I needed a break whether I knew it or not to give me a recharge as after all, by 2007 I’d been going to festivals in some shape or form since 1989 and Glastonbury since 1992, so I’d got some festival miles racked up. There’s only so much mud one can bloody take when you get older but I was going to be at the festival in 2008

Come back next time for the tale of Glastonbury 2008 and 2009, the year that never was…