I’ve recently dived into doing ”best of’ lists, so as I’ve explained, I’ve decided to do my top 20 SF films. This is my personal list, so feel free to disagree with it and of course, you’ll be horribly wrong.

Number one is probably a surprise to some, it’s Terry Gilliam’s amazing Brazil. 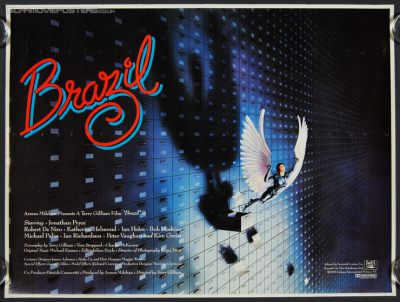 Why Brazil and not some of the other more obvious films on my list? Well, it’d have been in the top ten for sure but I watched it again a month or so back after not having seen it in probably a decade or so, and had forgotten that this is probably one of the most imaginative films you will ever see.

Yes it owes much to George Orwell’s 1984, and other dystopian fiction, but it also owes much to the imagination and talent of the great Harvey Kurtzman, one of Gilliam’s early employers and clear inspiration of his work, and obviously through that of Monty Python. In fact there’s dozens of various sources Gilliam liberally borrows from in the film, strains it through his eyes and out comes what is still a remarkable bit of SF that is, and considering the well-documented struggle Gilliam had in getting this out there it’s all so more remarkable for it.

Brazil is a tale of a man fighting against the horrible bureaucracy of a repressive state while at the same time dreaming of clouds, beautiful women and flying. Most of us have dreamed of flying or clouds, and a fair chunk of us dream of women so Sam Lowry (played by a splendid Jonathan Pryce) sails through life trying to make his life easy but after seeing the girl from his dreams his life falls apart as he comes into contact with what the state deems terrorists (a cameo from Robert DeNiro when such a thing meant something) in a plot that has terrible reminders of today, let alone the 1980’s when this film was made.

This is a film where you can sit down and take a lot from it. It’s not a film that disappears from the memory from the darkly comic opening to the sad, dismal ending that’s so terrible that America got a santised happy ending initially. A happy ending isn’t what this film needs as the ending as it should be is perfect. It’s horrible, but it can’t end any other way.

Brazil is my favourite SF film. Every time I see it, I feel like I’m seeing it anew. It’s really that special a film for me. That’s why this film is at the top of my list.

So that’s it for my list, or is it? I’ve got one more special bonus blog to make about my Top 20 Sf films….