Last time I spoke about Tommy Cooper and how he was just funny, while having a wee moan about the sort of processed student comedy that passes for funny in the 21st century. One of the other things that’s astonishing about this rise of tedious comedy is the sheer amazing amount of things that are suddenly considered funny again like racism and rape jokes.

This isn’t to say that within a certain context these types of subjects don’t work in comedy. They do, as anyone familiar with Lenny Bruce or Jerry Sadowitz can testify. If you’ve ever heard a Derek and Clive album you know how extreme comedy can be, and that’s the thing with all these examples; they broke taboos for reasons or just to offend people and I’ll defend to my last breath the right of people to offend others.

However the fact that rape (among other subjects, but for this blog it’s this subject) has become an easy way for ‘edgy’ comics to show how ‘adult’ their material is. It’s the same as comic books show how ‘edgy’ and ‘mature’ they’ve made superheroes by having them rip each other apart… 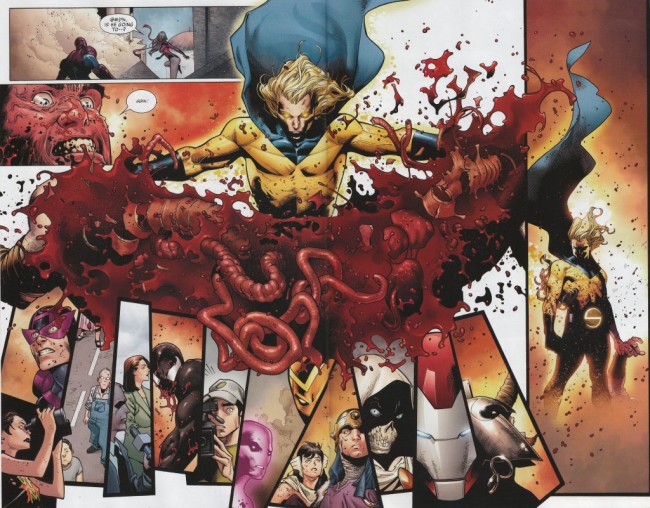 It’s as if someone was inspired by The Godfather and ditched all the characterisation, plot development and dialogue to just concentrate on the violence and gore because that’s ‘mature’.

It’s the juvenile nature of the rape jokes that’s so bloody annoying, but it’s also tied into the fact for many people it’s a direct way to attack female comedians as you can see by reading this piece by Lindy West which peels off the blackened scab to allow the pus of sheer fucking misogyny that runs through a lot of comedy fans.

Why do people think that Tweeting this: 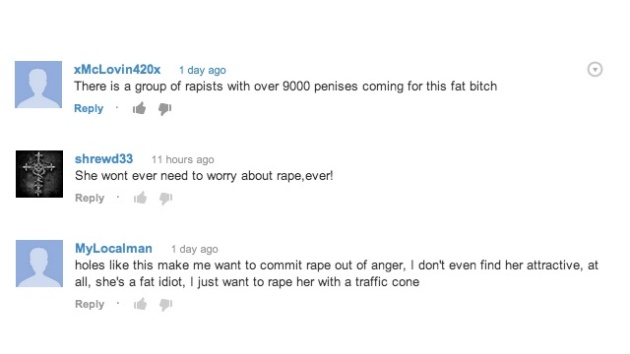 It’s just horrendous and shows the people saying this probably really do genuinely hate women in comedy, and probably  piss themselves laughing when Jimmy Carr cracks a few gags about rape, when really it’s sad because all Carr is doing is pandering to a section of mouth breathers who see rape jokes as ‘edgy’ because you’re not a comic now unless you’re ‘edgy’. Being funny for funny’s sake, or making a valid point, or forcing the audience to confront uncomfortable truths about themselves tend not to create bestselling DVD’s at Christmas, or get you that guest slot on panel shows.

However it’s the attacks upon women that’s shocking as just when you think we’re past all this you realise we’re onto a new generation, and they’re hiding behind their keyboards because attacking women online is just a laugh isn’t it?!

It’s the normalisation of rape that’s the worst aspect of this though. It’s the fact these scum don’t realise that rape is a crime of violence, and these attacks on female comics are acts of violence but social media gives teenagers and men the chance to do this without fear of reprisal.

There’s a scene in Alan Moore and Eddie Campbell’s wonderful From Hell where men across the UK suddenly start writing fake Jack the Ripper letters to the early versions of Tabloid newspapers in order to get whatever is in them out in the open, The Ripper gave them that chance and Moore touches upon this wonderfully. The same principle is here with these Tweets and attacks upon female comedians because it says how much rape especially has become ‘normal’ by a generation who see women as objectified and not people as can be seen in not just this article I linked to, but generally across comedy forums and if you go to comedy clubs, especially the large ones like Jongleurs where the lowest common denominator often isn’t low enough.

Like I said, I will defend anyone’s right to offend other people. I will not however defend someone being a twat, or in this case, using rape as a threat to scare and intimidate women because some want to be comedians as some people still want comedy to be a male only territory.

It’s frankly pathetic and a sign of how we as a society need to start making things very clear to younger generations where the moral line is drawn.  You’re not a real man if you’re throwing around rape as a threat, you’re just a piece of shit.

That said, I do like how Isabel Fey dealt with those people who did the same to her.