Issue 4 of Marvel’s rather splendid Marvelman/Miracleman reprints hits the end of Book One, A Dream of Flying, and it’s a defining point as this for me is when Alan Moore hits his stride as a writer on the strip. It’s also an ending which turns everything on it’s head. 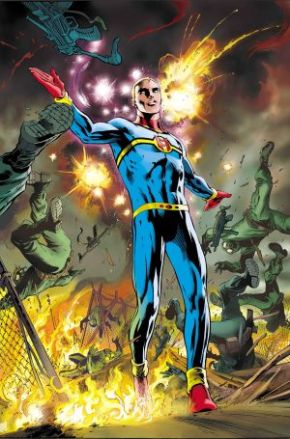 At the end of last issue Mike Moran had been kidnapped by pointlessly sapphire toothed secret agent Mr. Cream, and as this issue opens we see Miracleman being attacked by British soldiers to keep him away from the bunker which houses Project Zarathusta. He’s also bizarrely attacked by ninjas, as if the British army trained ninjas. They’d obviously have to be Geordie Ninjas, and there’s a comic strip all by itself…

The build up to Miracleman arriving at the bunker is still a wonderful bit of storytelling as the army throws everything at Miracleman in the futile hope of keeping him away, or even killing him. We also see how utterly callous Miracleman is in his dispatching of these soldiers, which was something we’d not been used to seeing from our superheroes in 1982, though sadly today it’s a lazy device used by hacks to show how edgy they are. 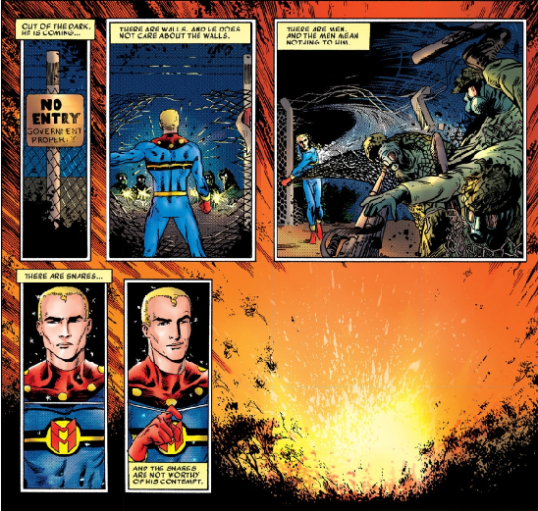 The art of Alan Davis utterly shines in these stories as he develops away from the style that Garry Leach introduced on the strip to this vaguely cartoony style, which suits the vaguely unreal (in a superhero context) story we’re reading. The panel where Miracleman meets Big Ben for the first time shows the sort of absurdity I mean as you’ve got the poetic, slim Miracleman facing off against the cliched superheroic look of Big Ben. 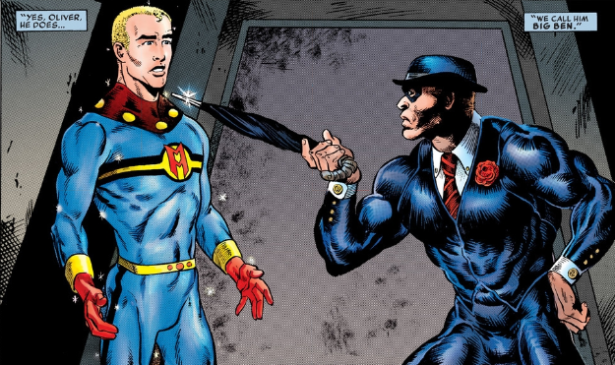 The start of the next chapter of reprints from Warrior, also features the first example of censorship, at least in the Comixology version (the supposed ‘parental guidance’ edition)  which is clear from the panel below.

Now I understand why they’d want to edit the word ‘nigger’ out of the strip if it was gratuitous, but in context, it’s part of the narrative and it is supposed to be an utterly shocking moment, but Marvel editing the word out took me out of the story. It’s a pity as Marvel have handled these reprints brilliantly, assuming of course, Marvel did this and it wasn’t Comixology so if anyone has a print copy and would like to confirm it’s the same there I’d be grateful.

Anyhow, after this there’s a fight scene between Miracleman and Big Ben which is suitably short, not to mention still quite funny as Moore parodies the superhero fight. In fact it’s interesting to see how much like superhero comics today this fight scene is. The scene though is a break before the final chapter of this first book which reveals Miracleman’s origins (or at least a part of them as more is to come in Book Two) and the person behind it all.

How this plays out in Book Two is brilliantly done, assuming Marvel don’t cock up the reprints as there’s a lot of material in the next volume which is ‘difficult’ to put it mildly for new readers however for now the first volume of reprints ends with a mirroring of how it opened as we see Moore starting to develop as a writer not to mention Steve Oliff’s truly spectacular colouring of the original black & white artwork.

The issue wraps up with reprinting the Alan Moore/Alan Davis framing pages from Quality’s Marvelman Special #1, the comic which started off part of the whole legal problems around the character and is now reprinted by the very company which kicked off 30 years ago. It’s not essential to the story but it’s a nice few pages for the completists. The trade collection of A Dream of Flying is out soon & I recommend it to anyone, especially fans of the medium and the superhero genre.

Next time in the Marvel reprints, it’s the start of Book Two, The Red King Syndrome.

The censorship mentioned in this blog is also in the print edition. Not an impressive move by Marvel, though I understand why but they could have stood by the creative team. I can’t imagine Moore (not that he’d care about Marvelman anymore) being too impressed.

Comixology didn’t initially include the Warpsmith story reprinted from A1 #1 but updated the issue to include it. Ghostdancing is a nice short featuring a Warpsmith funeral which is exceptional because of the splendid Garry Leach art. It’s worth picking this issue up just for this strip alone. 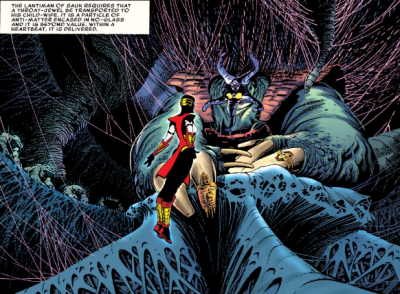 It’s not essential to the main story, but it’s a great bit of background to what’s to come in Book Two, and especially Book Three.

As an introduction of sorts to the forthcoming UKCAC blog, I thought I’d outline the world before UKCAC changed how comic conventions were in the UK.

Well, actually no. That’s kind of been done in this rather wonderful blog Dez Skinn did on his site, but that’s all fine and dandy if you’re of a certain age and you lived down south, but if you grew up in Glasgow in the 70’s it was nigh on impossible to go to somewhere exotic like Largs, let alone somewhere as distant as London.

The point is that the pre UKCAC days were really quite hard for me to relate to as my first convention was Albacon, a SF convention held in Glasgow in Easter 1980, and my first comic mart was in the spring of 1982, but the first real comic convention I went to was also one I played a part in organising, so the real first comic convention I attended was one held in Birmingham in July 1986 which was a fiasco (I will tell the tale of it sometime) and a half. It was also one of the last conventions Alan Moore went to, and it was one that made me consider that these things were a fucking waste of time thanks to the mess the entire weekend left me in.

That’s a story for the UKCAC blog though.

The point is that by the time I got to my first UKCAC in 1987 comics were no longer the preserve of a handful of hardcore fans but opening up to be a mainstream activity thanks to the success of Watchmen, Dark Knight Returns and Maus in the middle of the 1980’s.

And at this point you’ll have to wait til the main event…….