A few weeks back when attending the Bristol Comics Expo, myself and a couple of friends were talking about the old Aurora monster model kits of the 1960’s and 1970’s being a bunch of old bastards.I though this would be a brilliant thing to blog about, especially as there was some controversy over some of the kits being marketed to poor wee kids like me.

Then a few days later the website Mental Floss went and published this, which was roughly what I was going to write myself.  Bastards.

So a change of approach was needed, but first a quick potted history of the Aurora monster model kit for those of you unable to click on the link in the first paragraph.Aurora started making monster kits in 1961 with the Karloff Frankenstein Monster kit being their first, and indeed, when I was a wee child in the 70’s it was my first kit too.

They then went to release 13 kits in total, including my favourites, Godzilla, the Creature From the Black Lagoon and the Forgotten Prisoner. 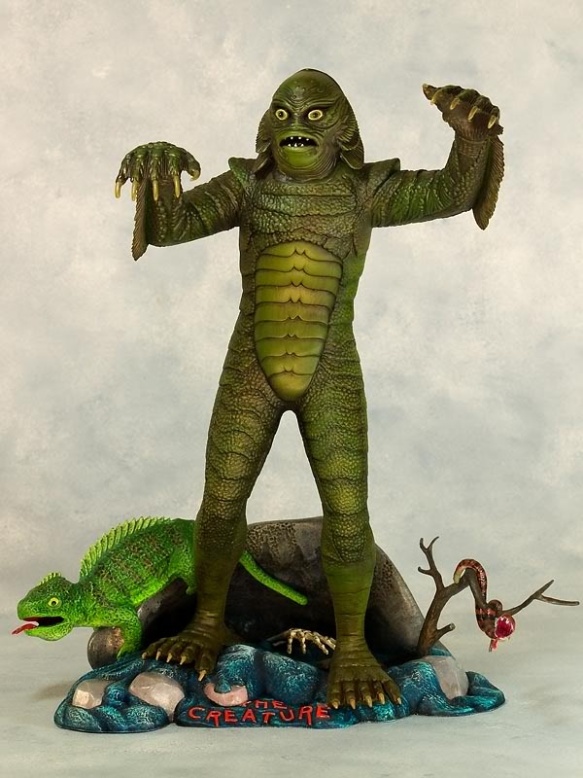 They then diverged into other horror related kits as well as science fiction and comics related kits. I had the Batman one and the Superboy one. 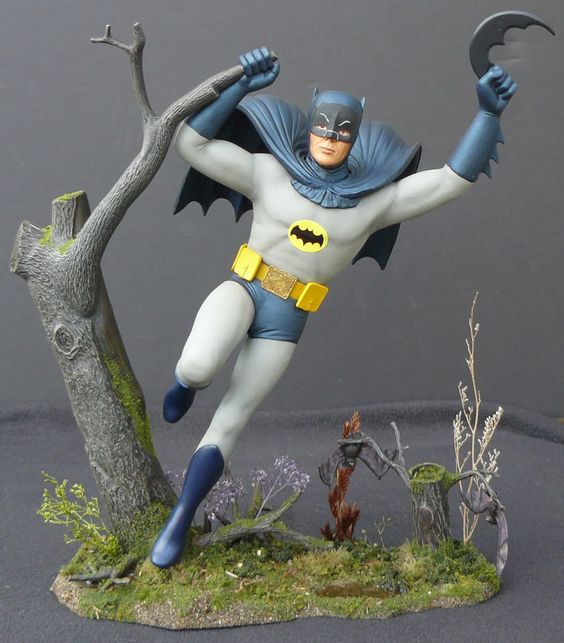 I loved Krypto, Superboy’s dog, squaring up to the alien dragon thing he and Superboy were posing in front of.

Anyhow, in 1975 Aurora released another wave of movie monsters, and a few years later they died off as kids looked to finding out what to do with girls, and have fun with these new fangled video games things which really would never catch on…

It then dawned on me there’s no point retelling the story of the naughty, almost pervy kits, as anyhow, that’d been done by those mind-reading wankers at Mental Floss, so if you haven’t noticed so far I’m telling the story of what these kits meant to me, not to mention the thousands of mainly men now encroaching upon middle age wishing they still had them instead of losing, selling, breaking them over the decades.

As I’ve said, the first one I had is that lovely Frankenstein Monster kit, it is a thing of beauty, but that set me off as a child I was mental on the old Universal Monsters even though at this point I hadn’t  seen the 1930’s film until the BBC frequent summer horror film double bill seasons broadcast them, however it was seeing the Aurora ads in DC Comics of the early 1970’s that got me, a wee DC fanboy, hooked. 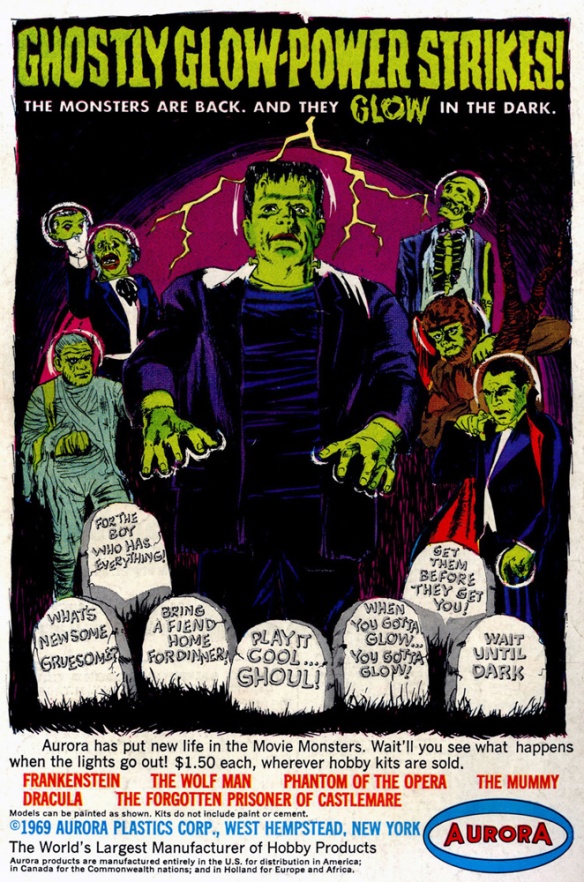 In the early 1970’s the monster kits were easy to find in Glasgow where I grew up. I even used to buy two with my meagre pocket money, one to make up with the glow-in-the-dark parts, and one without. Unfortunately the superhero kits were a nightmare, but a wee stall in the Barras sold some of them.  I managed to pick up the Superboy and Batman, but couldn’t get the rest, though the same stall did sell loads of old Mego dolls which led me to having a full set of their DC, Marvel and Star Trek dolls but that’s another blog for another time.

What was an issue was getting the naughtier kits like Vampirella who my parents decided was a bit much for me at an age where pubic hair was still something to look forward to. The idea was to build up all this wave of kit into a playscene you could swap around to your demented wee hearts delight. 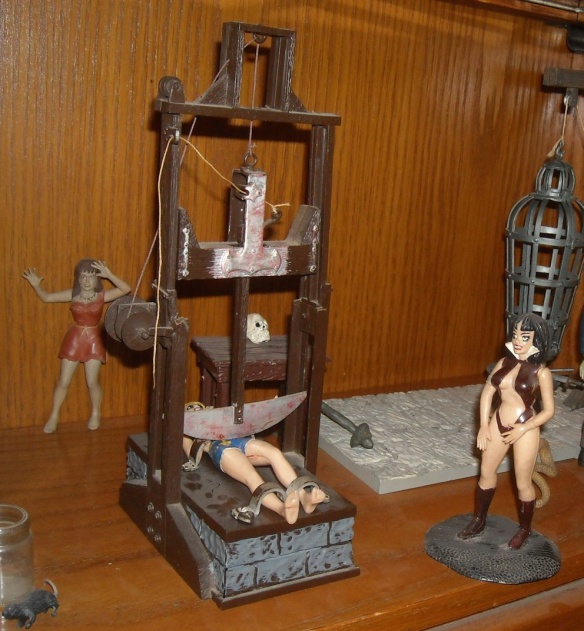 Someone thought that kids would love these gruesome scenes of torture and of course they were entirely right. This was the heroin of the Aurora model kit to the movie monsters crack for kids because once you started collecting these kits you couldn’t stop, they were immensely addictive. They may not be safe or sanitised, but to be honest, there was their joy.

Then you grow up.

You put these kits away in cupboards, or they get broken or when you move they’re left behind but it isn’t til later that you realise that they were essential, if pervy in some cases, parts of your childhood. That’s not to say that when I was older I didn’t try to get them back, especially when after leaving Glasgow and on a trip back in 1994 I was taking my then girlfriend round a tour of where I was brought up and I saw a shop on Maryhill Road had loads of these kits in their window. Sadly I didn’t have the case, or the space to return with a load, plus a confused looking girlfriend wanting a bevvy back in the West End took priority.

The kits today go for eye-watering sums of money, and the pictures I’ve used in this blog are liberally nicked from the internet as my own kits probably sit near the bottom of a landfill site somewhere in the country, but these kits were a wonderful bit of growing up for me. Brilliantly designed, wonderful looking and fun to make not to mention collect. There’s not an awful lot I’d have back from my childhood given a chance, but I’d have these, plus should I ever win the lottery I’d make a lot of sellers on E-Bay have an amazing day.

And the moral is that even if a major site like Mental Floss rips your idea off days after you’ve thought it up, there’s always another angle to tell a wee story of your own…

So I’ve done my top 20 horror films, and the horror films I hate, and as promised, here’s why I didn’t include any Hammer Films in my top 20. I wanted to do something separately as really, I could fill a top 20 up just with Hammer Films, so let’s crack on….

Number Ten: Hands of the Ripper.

A female Jack the Ripper? What’s not to like about this!

Ever since I saw this on the old BBC horror double bill I’ve adored it for the bizarre bit of Gothic it is, and Peter Cushing is brilliant in it.

Number Seven:The Plague of the Zombies.

It’s the best Zombie film not made by George Romero.

Why this was never the huge hit Hammer wanted and needed is a bloody mystery. It’s brilliant.

Number Four:The Curse of the Werewolf.

Oliver Reed. Werewolves. Heaving bosoms! It has it all!

This is simply my favourite version of the Bram Stoker story. It’s got Christopher Lee being all mean and hunky, while Peter Cushing plays Van Helsing like an action hero. It’s fantastic stuff.

There’s something coming up in regards Quatermass as a whole that I’m planning, but I couldn’t leave this film out. It take a brilliant bit of television and makes a brilliant bit of cinema that still thrills, scares and excites me as an adult as it did when I was a kid.

Number One: The Curse of Frankenstein

This is the film that gave us Hammer Horror. It recreated the classic monsters from an Americanised setting as the Universal monsters left them in. It gave us Christopher Lee and Peter Cushing as fully formed stars. It gave us Kensington Gore by the bucketload. It upped the ante for screen violence. It created modern Gothic Horror. It’s also a bloody great film.

So there you go, there’s the countdown of my top ten Hammer Films. but as an extra bonus here’s the trailer for Carry on Screaming!…