The answer is yes, the KLF, aka, The Justified Ancients of Mu Mu aka The Timelords, aka The JAMS, are back. Bill Drummond and Jimmy Cauty have been doing their own thing for the last 23 years (and those who’ve read John Higgs excellent book on the KLF know the significance of the number 23) and now look to return in August with new material.

The Quietus outlines the story of their return, but as always there’s holes in the story which means the ‘truth’ will be something we never know and that’s a good thing in an age where everything is spelt out in minute detail for the hard of thinking. 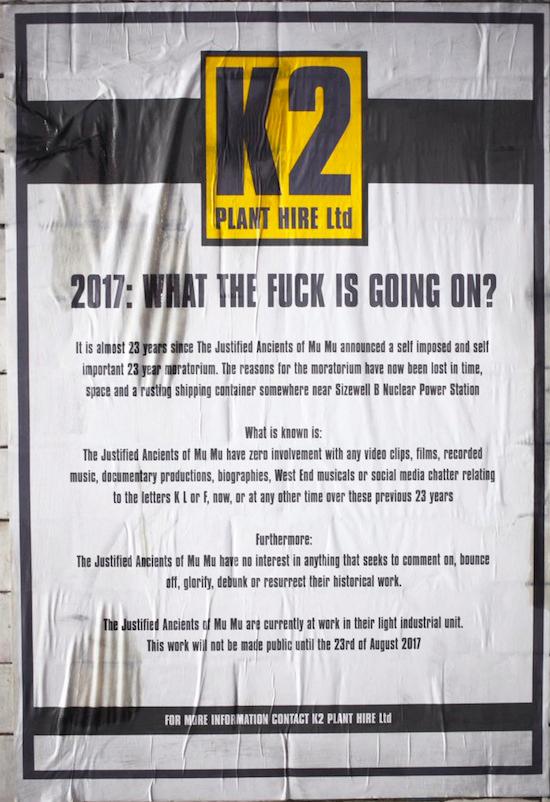 The excitement started on New Year’s Day when this video was leaked online.

This was the video made for the KLF night a few months back at the Cube in Bristol which in retrospect looks to to have kicked Drummond and Cauty into some sort of action but again. we’ll probably never know.

I’m sure whatever happens they’ll be a bit more to the story of the KLF and if that results in new music, art or whatever the hell they decide to do it’ll be one of the most interesting things in what promises to be a potentially bleak year.

There’s a point in this interview between Alan Moore and writer John Higgs where they discuss the diminishing returns of current entertainment and why giving people what they want isn’t a good thing.

The example used is from Moore’s League of Extraordinary Gentlemen: Century, which among its many threads plots the development of art from Bertholt Brecht’s The Threepenny Opera to J.K Rowling’s Harry Potter series. If you’ve read the comic it won’t come as any shock that Moore’s somewhat scathing of where art has developed from hard, challenging work which ended up being successful to softer, more pandering work that gives people what they want, or at least what they think they want because once you’re eating your own culture, your own art you enjoyed when younger, you’re not going to be open to new ideas especially if they challenge you.

This can be seen in the diminishing returns of summer blockbuster films, which sees a film like Ben Hur being released to the excitement of utterly nobody, but it did help inspire a wonderful video from the people at Red Letter Media.

So what’s the problem? Why has modern culture collapsed to the point where we get Ben Hur remakes nobody wants and endless Harry Potter spin-offs which are lapped up eagerly, but are hardly an example of original modern culture. The simple answer is money. The more complex answer is it’s money, a sense of fan entitlement plays in there too as fans wanting what they want results in things like Batman Versus Superman and we all know what a disaster that was.

But the sad answer is too many people have become used to playing it safe, and the ethics of consumerism has sneaked into popular culture. A film like Ben Hur is the cinematic version of an Iceland frozen meal, it might taste nice once or twice but you either learn to cook or you become grotesquely unhealthy from consuming a diet of crap but you get used to it and venturing away from that diet is a scary, weird thing as although that diet is shite, it’s not a balanced diet.

Challenging this can be hard, yet even mainstream culture can throw out a googly. Guardians of the Galaxy was a risk, yeah it was a massive hit but it isn’t seen as one of Marvel’s better films because it stuck to a formula, and although it terms of originality it wasn’t going to rate highly, it at least tried to break a mould. If more people actually sought out work which was more challenging, perhaps not as familiar to what they’re used to we’d have a better cultural world to enjoy, rather than living in one where someone high on coke decided a remake of Ben Hur was the perfect way to provide a snapshot of where culture is in 2016.